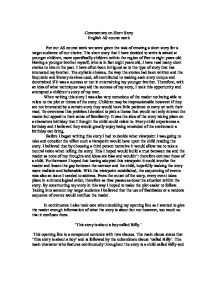 The short story that I have decided to write is aimed at younger children, more specifically children within the region of five to eight years old.

Commentary on Short Story English AS course work For our AS course work we were given the task of creating a short story for a target audience of our choice. The short story that I have decided to write is aimed at younger children, more specifically children within the region of five to eight years old. Having a younger brother myself, who is in fact eight years old, I have read many short stories to him in the past. I have often been intrigued as to the type of story that has interested my brother. The stylistic choices, the way the stories had been written and the linquistic and literary devices used, all contributed to making each story unique and determined if it was a success or not in entertaining my younger brother. Therefore, with an idea of what techniques may aid the success of my story, I took this opportunity and attempted a children's story of my own. When writing this story I was also very conscious of the reader not being able to relate to the plot or theme of the story. Children may be impressionable however if they are not interested by a certain story they would have little patience to carry on with their read. ...read more.

Further more I followed this compound sentence with a simple sentence to create a balance regarding the amount of information I enforce upon the reader. This I hoped would enhance the readers understanding and reduce the chance of them becoming confused. 'Billy was the Birthday Boy.' As this story is targeted at a younger audience I wanted to create a warm and pleasant atmosphere so not to scare or concern the child. I hoped to achieve this using a number of techniques. For instance the graphological features that I have used consist of brightly coloured images presented upon every page, this not only brakes up the text to sustain the reader's interest but actively presents the reader with the imagery that I wish to convey. In addition, this relaxed atmosphere does become slightly tenser when the reader realizes that not only have Billy's presents been stolen but that Billy himself maybe in danger. However, as I had already created such a warm and secure atmosphere for the reader I therefore did not have to deviate from this existing atmosphere too much to change the mood of the story. If I had to deviate significantly the reader may become scared and not wish to carry on reading. When focusing my attention upon the vocabulary that I was going to use I again had to consider my target audience. ...read more.

to life in the readers head and therefore help the reader to feel Billy's happiness as well. 'Billy, you are allowed to open one of your presents before you and your friends sit down to eat' Again I used dialogue when revealing who the birthday burglar was. I hoped by using this technique I could make Billy's relief more immediate to the reader and therefore add emphasis to its meaning. 'Happy Birthday Son!' From the first page I wanted to demand attention from the child to capture their interest immediataly. I attempted this by replacing the phonemes that begin the words birthday boy, with capital letters to create Birthday Boy. 'Billy was the Birthday Boy' This I hoped would lay emphasis upon the alliteration of the letter 'B' and as the alliteration creates a plosive sound I believed that this opening page would demand the attention I desired. I also used ellipsis to link pages to not only emphasize the enormity of Billy's task in finding the Burglar but to create a sense of anxiety and again sustain the readers attention. In conclusion I wanted to leave the reader reassured regarding the problematic events that lead up to the end of the story. I did this by making the ending very clear, as distress toward Billy would have been felt by the reader if the happy ending did not reassure the child. ...read more.