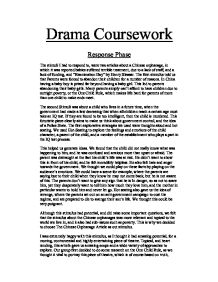 The stimuli I had to respond to, were two articles about a Chinese orphanage, in which it was reported babies suffered terrible treatment, due to a lack of staff, and a lack of funding, and &quot;Examination Day&quot; by Henry Sleasar.

Drama Coursework Response Phase The stimuli I had to respond to, were two articles about a Chinese orphanage, in which it was reported babies suffered terrible treatment, due to a lack of staff, and a lack of funding, and "Examination Day" by Henry Sleasar. The first stimulus told us that Parents were forced to abandon their children for a number of reasons. In China having a baby boy is prized far beyond having a baby girl. This led to parents abandoning their baby girls. Many parents simply can't afford to have children due to outright poverty, or the One Child Rule, which makes life hard for parents of more than one child to make ends meet. The second Stimuli was about a child who lives in a future time, when the government had made a law decreeing that when all children reach a certain age must take an IQ test. If they are found to be too intelligent, then the child is murdered. This futuristic piece clearly aims to make us think about government control, and the idea of a Police State. The first explorative strategies we used were thoughts aloud and hot seating. We used Hot-Seating to explore the feelings and emotions of the child character, a parent of the child, and a member of the establishment who plays a part in the IQ test process. ...read more.

The mother of the child was then determined to find her daughter and bring her "home," as they could now afford to bring her up. The father was more sceptical and pointed out the difficulties in finding her. His views were more balanced and practical, where as the mothers will was clouded by maternal instincts and stubborn determination. The mother (Annabel) then makes it clear to the father (Charles) that she is going to find her daughter with or without his help, and subsequently gets a job in the orphanage where Annie (the abandoned baby) was found, in order to acquire information about her whereabouts. As there were many different climaxes and emotions in our piece of theatre, we decided to use role-play, freeze frame and thoughts aloud in unison. We would have a role-play going between some of the characters. For example, one group member would give a scenario, e.g. "You have just abandoned your baby and are arguing about whether it was the right decision." The characters cast as the biological mother and father would then start the role-play. At one point a group member would say: "stop." This would usually happen at a climax or poignant moment. Then, the actors would freeze in a still image. ...read more.

The character should speak with an air of self-pity, and should come across as a weak man, defeatist man who cannot bounce back from depression. He should do this by asking the questions like "I wasn't that bad was I," with a small quite voice and a hurt expression to draw sympathy from his listeners. He should also use power and pace effectively. His voice should be quiet throughout, as he is a broken man, and wants to come across as vulnerable and fragile as if seeking support. He is also trying to justify his being a bad father and husband t himself. That is why when he faces up to the fact, he is so defeatist and chooses the "easy way out of Suicide." " How weak is that? I couldn't tell the girl, I allowed her to be unaware. It was my fault the shock hurt so much when she found out. It was my fault she left (sobs and drinks more) couldn't cope after she went. Went to pieces. Didn't even talk to Susannah didn't reassure her, comfort her. And now I wonder why she left me. " This section of the speech is important, as the pace should quicken, because he is beginning to admit he is to blame, and he begins to berate himself. ...read more.