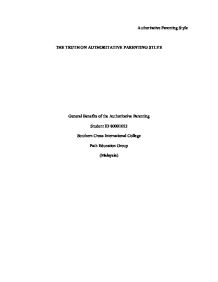 THE TRUTH ON AUTHORITATIVE PARENTING STLYE

Authoritative Parenting Style THE TRUTH ON AUTHORITATIVE PARENTING STLYE General Benefits of the Authoritative Parenting Student ID 80001023 Southern Cross International College Path Education Group (Malaysia) Authoritative Parenting Style 2 General Benefits of the Authoritative Parenting Each day more than three-quarters of a million adults around the world experience the joys and heartaches, the challenges and rewards, of becoming new parents. Despite the fact that most people become parents, and everyone who ever lived has had parents, parenting remains a somewhat mystifying subject about which almost everyone has opinions of which few people agree. But the continuing task of parents in each generation is to prepare children of the next generation for the physical, economic, and psychosocial situations in which our children must survive and thrive. Many factors influence the development of children, but parenting style and parenthood are the "final common pathway" to childhood oversight and care giving, development and stature, adjustment and success. The fit is neat because childhood is the phase of the life cycle when parent-provided experiences are believed to exert their most significant and salient influences: Not only is the sheer amount of interaction between parent and child greatest then, but childhood is the time when human beings are particularly susceptible and responsive to external experiences. Parental influence, and prolonged learning, is thought to be the evolutionary reason for building of the childhood experiences. There are questions that needs to be addressed on the positives of authoritative parenting for parents, the present-day problems of authoritarian parents, and the results or reasons why we are who we are, and why we are so different from one another. We need to attend to what we know about the values and positive or negative aspects of the parenting style, and capitalize on that knowledge. Every day babies are born into the world and every one is unique and dear and special, and because we are all concerned how these children turn out, we need to turn our attention to the nature ...read more.

When children's behavior gets too inappropriate, then parents respond with Authoritative Parenting Style 10 upper limit controls to reduce or redirect such excess behavior. When children are too shy and withdrawn, then parents respond with lower limit controls to prime or stimulate appropriate behavior. To extend the response further, parents may have yet another set of responses to maintain or direct appropriate child behavior in between upper and lower limit controls. The relevance of Bell's theory for the conditional sequence model is that the punishment tactics may need to be used more often as upper limit controls than as maintenance responses or lower limit controls. Punishment will be elicited more often by children who act out, a conclusion consistent with a wide range of research. Whether punishment is more effective with more aggressive children is debatable, but there are some supporting lines of evidence. A second piece of evidence is from the Straus et al. (1997) data set. In three of the five cohorts, the apparent effect of spanking frequency depended upon the initial level of antisocial behavior (Straus, 1997, personal communication). For children initially high on antisocial behavior, spanking frequency reduced their subsequent level of antisocial behavior. For children who were lowest on antisocial behavior, spanking frequency increased their subsequent level of antisocial behavior. In terms of Bell's control system model, this suggests that punishment is more effective as an upper limit control than as a maintenance or lower limit control. Consistent with the conditional sequence model, parents should be looking for opportunities to use gentler disciplinary responses when they can. The Straus et al. evidence suggests that frequent spanking becomes counter productive with relatively well behaved children. There are optimal ways to combine love and limits in disciplinary responses than to focus too much on disciplinary responses and ignoring the many important aspects of Authoritative Parenting Style 11 positive parenting of which the larger parenting context. ...read more.

I don't spank him (and haven't since he was two and only during a dangerous encounter with an electrical outlet), I don't humiliate him and I am consistent with his discipline. He knows what is expected of him. He knows what the consequences will be and that he will suffer them. He knows he will be rewarded for good behavior (with love, affection and praise and occasionally a special treat). He has no problems with self-esteem and thus far he has shown a good ability to problem solves and I rarely have behavior problems with him. Personally, I think the authoritative parenting style has very positive outcomes especially if it's used consistently with all parents. I do not think that it may be the best form of parenting for every person. Some kids act out to one style and need a stricter Authoritative Parenting Style 19 environment, or they need to not feel like they have too many rules in order to feel they are making the right decisions on their own. I could really relate to it since I was raised with an authoritative parenting style. Some of my friends with more lenient parents thought my parents were strict on rules such as curfew, but I never felt like my parents were stifling me. They set rules, but they also let me be my own person. I think one of the most important parts of the authoritative parenting style is that the parents remain supportive and caring. I did not break the rules to spite my parents because I thought they were overbearing. On the other hand, I would not break rules because I did not want to upset my parents because I respected them. I also understood the more honest I was with them and the more I discussed what I did wrong, the more they would trust me and let me have more freedoms. Because they were so caring, I valued their opinion and usually believed that they knew what was best. ...read more.