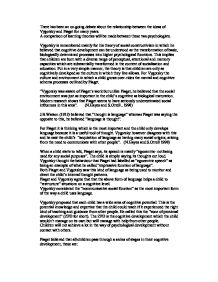 There has been an on-going debate about the relationship between the ideas of Vygotsky and Piaget for many years. A comparison of learning theories will be made between these two psychologists.

There has been an on-going debate about the relationship between the ideas of Vygotsky and Piaget for many years. A comparison of learning theories will be made between these two psychologists. Vygotsky is remembered mainly for his theory of social constructivism in which he believed that cognitive development can be understood as the transformation of basic, biologically determined processes into higher psychological functions. This implies that children are born with a diverse range of perceptual, attentional and memory capacities which are substantially transformed in the context of socialisation and education. Put in a very simple manner, the theory is that children are only as cognitively developed as the culture in which they live allows. For Vygotsky the culture and environment in which a child grows over-rides the mental and cognitive schema processes outlined by Piaget. ...read more.

The child is simply saying its thoughts out loud. Vygotsky thought the behaviour that Piaget had labelled as "egocentric speech" as being an example of what he called "expressive function of language". Both Piaget and Vygotsky saw this kind of language as being used to monitor and direct the child's internal thought patterns. Piaget and Vygotsky agree that that the above form of language helps a child to "restructure" situations on a cognitive level. Vygotsky considered the "communicative social function" as the most important form of the way a child uses language. Vygotsky proposed that each child has a wide area of cognitive potential. This is the potential knowledge and expertise that the child could reach if it experienced the right kind of teaching and guidance from other people. ...read more.

7-11 yrs of age. The concrete operational stage. This was Piaget's third stage, at this time a child's thinking was very like that of an adult, but it would have difficulty in dealing with purely abstract concepts. 4) 11 yrs - adulthood. The formal operational stage. By this stage the child's thinking is like that of an adult, it can now handle abstract logic, develop theories about the world, test them out and use abstract concepts in thinking. Although Piaget considered cognitive development happened through interaction with the environment he nonetheless though that it was an inherited process as a certain form of thinking could not develop until a child was ready for it. The work of Piaget and Vygotsky is similar, they share some of the same views, although Vygotsky believed that the social environment was an important factor in the child's cognitive development, whereas Piaget believed thinking is the most important factor in a child's cognitive development. Michelle Jones. Gcse psychology, 2002. ...read more.