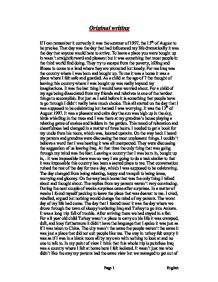 They were discussing the suggestion of us leaving Iraq. At that time the only thing that was going through my mind

Original writing If I can remember it correctly it was the summer of 1997, the 15th of August to be precise. That day was the day that had influenced my life dramatically it was the day that anyone would hate to arrive. To leave a place you were bought up in wasn't straightforward and pleasant but it was something that most people in the third world find doing. They try to escape from the poverty, killing and illness to come to a land where they are protected but lonely. For me Iraq was the country where I was born and bought up. To me it was a home it was a place where I felt safe and guarded. As a child at the age of 7 the thought of leaving this country where I was bought up was really beyond my imaginations. ...read more.

On the way back I heard my parents and grandma were discussing the most unpleasant things. I couldn't believe a word that I was hearing it was all unexpected. They were discussing the suggestion of us leaving Iraq. At that time the only thing that was going through my mind was the fear. Leaving a country that I was born in, bought up in, . It was impossible there was no way I am going to do a task similar to that it was impossible this country has been a sacred place to me. That conversation ruined the rest of the day for me a day, which I was supposed to be celebrating. The day changed from being relaxing, happy and tranquil to being tense, worrying and gloomy. ...read more.

The city wasn't the same the people weren't the same it was just a place that did not suit people like me. The stay in turkey felt empty it was as if I was in a blank room all by my own with nothing to look at and no one to talk to. In my point of view I think that this whole trip is pointless Iraq was a country where I felt at home here I felt isolated. It wasn't just me who didn't like the stay my parents had the same view but we managed to get out of this country and to go to a place where I did have relatives I didn't really mind since going back wasn't an option. My imprisonment in turkey had ended I found myself walking towards the plane that shall take even further away from my home, family, friends the only thing I could think of was to say goodbye, goodbye Iraq. Page 1 English ...read more.