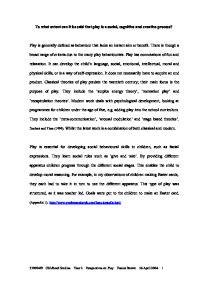 To what extent can it be said that play is a social, cognitive and creative process?

To what extent can it be said that play is a social, cognitive and creative process? Play is generally defined as behaviour that lacks an instant aim or benefit. There is though a broad range of criteria due to the many play behaviourists. Play has connotations of fun and relaxation. It can develop the child's language, social, emotional, intellectual, moral and physical skills, or is a way of self-expression. It does not necessarily have to acquire an end product. Classical theories of play predate the twentieth century; their main focus is the purpose of play. They include the 'surplus energy theory', 'recreation play' and 'recapitulation theories'. Modern work deals with psychological development, looking at programmes for children under the age of five, e.g. adding play into the school curriculum. They include the 'meta-communication', 'arousal modulation' and 'stage based theories'. Dockett and Fleer (1999). Whilst the latest work is a combination of both classical and modern. Play is essential for developing social behavioural skills in children, such as facial expressions. They learn social rules such as 'give and take'. By providing different apparatus children progress through the different social stages. This enables the child to develop moral reasoning. For example, in my observations of children making Easter cards, they each had to take it in turn to use the different apparatus. This type of play was structured, as it was teacher led. Goals were put to the children to make an Easter card. (Appendix 1). http://www.gymboreeplayuk.com/franciswardle.html Gregory Bateson (1976) is known for the modern theory of 'meta-communication'. This deals with a child's social play. It combines theories with shared understandings about play strategies. Bateson (1976). The variations in different children's play behaviour, their use of play types and communication with others identifies clues to adaptation and development. Wilber (1996). Parten (1933), a modernist, believed strongly in the social aspect of play. He said there were six categories where children playing within a group engaged in social interaction. ...read more.

Play therapy is one way of helping a child overcome behavioural difficulties. It uses creativity processes with artistic tools to enable the child to overcome their problems. http://www.playconnections.co.uk/ Anna Freud, a proponent of the psychoanalytic approach believed the causes of a child's problem could be found in the frustration of the unconscious mind. The use of repetitive creative play enables the child to play out their problems. This helps the problem to be recognised. Davenport (1994). It is important for each child's individual creativity to match its personal stage of development. Some may argue that the way of judging a child's level of creativity is through the children themselves. Meader (1992) quotes: ' In order to be novel, the words or act must be unique "within the child's repertoire of behaviour." The criterion of appropriateness is met if the action is "pleasing or communicative or meaningful" to the child'. Meador (1992), p.164 Frank Baron (1999) stated that creativity involved the 'three p's'. A person engaging in a creative process, which produces a creative product. Children use objects in their play to represent things. Vernon (1970). I observed a structured play environment, where children were playing in the sandpit. It was set out as a dinosaur land. They were using their fine motor skills to build objects out of the sand such as dinosaur caves (Appendix 6). However Patricia Tallman Tegano (1991) believes that the process of creativity is more important than the outcome. The child may not have the skills to produce an end product. In September 2002 the Arts Council of England appointed the National Foundation for Educational Research to convey a 'scoping exercise' into child development and their creativity. The Robinson Report (1999) stated that despite strong links between the arts and creativity it could not be completely related to arts. It can play a role in areas such as maths and science. ...read more.

The other children were of no interest to the child. 3., I observed a group of children in a primary school setting, playing outside. They were engaged in the game 'hopscotch'. Some of the children did not understand the rule of 'hopping' along the squares. Instead they would jump. The teacher then came to assist the children and by using 'scaffolding' in turn taught them the correct rules. 4., In relation to the cognitive aspect of play I observed a group of children between the ages of 5-6 playing in a 'fairy tale' corner at a primary school. This form of play showed that children were using their thought processes. They had used their life experience of washing dishes, to re enact Cinderella washing the dishes. They had also organised the information of the story in the correct way so their play flowed. They were engaged in free flow play, as it was child led and no particular child was the 'leader'. They used their imagination to the full. 5., As Frank Barron stated a child's creativity could lead on to a hobby. This was evident when I asked a child of 11 years what they played. They stated they played football. On further questioning they said that they liked playing it at school, therefore had pursued it as a hobby outside of school. The child's use of structured play is shown through the fact that the game has set rules and goals. 6.,When I visited the primary school I noticed that when the children had tried hard in their work they were allowed to play in the sand pit. The sand pit was set out as a 'dinosaur land'. There were figurines of dinosaurs within the sand pit and tools such as spades. As I observed them I noticed that they were using their imagination. They were doing this by using the sand to represent things such as dinosaur caves and to build mountains. The children were also using both hands in developing their fine motor skills. They were using their hands midline to their body illustrating structured play. ...read more.