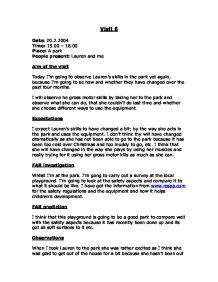 Today I'm going to observe Lauren's skills in the park yet again, because I'm going to se how and whether they have changed over the past four months.

Visit 6 Date: 20.2.2004 Time: 15.00 - 18.00 Place: A park People present: Lauren and me Aim of the visit Today I'm going to observe Lauren's skills in the park yet again, because I'm going to se how and whether they have changed over the past four months. I will observe he gross motor skills by taking her to the park and observe what she can do, that she couldn't do last time and whether she choose different ways to use the equipment. Expectations I expect Lauren's skills to have changed a bit; by the way she acts in the park and uses the equipment. I don't think thy will have changed dramatically as she has not been able to go to the park because it has been too cold over Christmas and too muddy to go, etc. I think that she will have changed in the way she plays by using her muscles and really trying for it using her gross motor kills as much as she can. FAR investigation Whilst I'm at the park. I'm gong to carry out a survey at the local playground. I'm going to look at the safety aspects and compare it to what it should be like. I have got the information from www.rospa.com for the safety regulations and the equipment and how it helps children's development. FAR prediction I think that this playground is going to be a good park to compare well with the safety aspects because it has recently been done up and its got all soft surfaces to it etc. Observations When I took Lauren to the park she was rather excited as I think she was glad to get out of the house for a bit because she hasn't been out much since Christmas because it's too cold to go out really and do things. Anyway when we got to the park, there was quite a lot of children there with adults, but it was warm. ...read more.

In Lauren's visits she has increased her hand and eye-co-ordination and her language skills, she has a very large vocabulary and she knows a wide range of spellings. She knows most of the basic stuff like the alphabet letters A-Z, numbers 1-50, counts in 10s to a 100, also counts in 20s to a 100. She can also write and spell her own name correctly. Lauren's gross motor skills are very good when at the park and making cookies. In visit 2 and 6 when I took Lauren to the park, I observed that Lauren has a good sense balance developing and she was able to walk, skip, jump, which is average for her to do this, according to the child development book. She can walk and run upstairs in an adult fashion. She can ride a tricycle confidently and she uses the pedals on it. She can catch and throw and kick a ball, which the level of ball skills she should be up to for her age. Overall I would say Lauren's physical development was a lot better than I expected it to be because she would rather play inside and do creative things, so I didn't think she would be too confident in the park and swimming etc. but she proved me wrong, as she is confident. She uses her gross motor skills how she is supposing too. Her fine motor skills were good as well and she gets these from playing indoors so I expected these to be good anyway. She can control a pencil with a mature pincer grasp. She can also fasten and unfasten zips and buttons and tie her own shoelaces. She showed me that when we was getting ready to go the park and coming home from the park etc. Intellectual development: Lauren is a chatty girl but can be shy at times, but when we was on our visits she was very chatty and she kept telling me lots of stories. ...read more.

But because Cameron goes to football practice at the same time of the swimming lessons, Cameron has to go in the earlier group because off the time difference also because Cameron isn't that strong swimmer and isn't too confident about the water and going in the pool, etc. Development: I observed her emotional development and positive emotions she gave when playing with the Lego. I noticed her language skills where rather good and her number skills were excellent. She is becoming increasingly skilful with her fine motor skills sine she enjoys playing with small object and construction toys. Her intellectual skills are brilliant because her imagination and her creativity are amazing. As she always seems to have something on her mind and knows what to do with the objects when they are given to her. Lauren played with the Lego for about half an hour, which is pretty good for a child to stick to playing with a toy for so long, but she must have enjoyed it to play with it. She was concentration hard when playing with Barbie' but lacked concentration when playing with Lego, she was just messing bout at times and been silly, trying to get attention. She uses her imagination a lot in whatever type of play she is doing whether its creative, physical, fine manipulative etc, she always has a sense of imagination. Cameron has a sense of imagination but his imagination seems to be the same all the time because he just thinks he is Spiderman and when he goes Florida Spiderman is going to pick him to be his helper and then he can't come home again. He told his um all this and he tries to copy things the Spiderman does e.g. climbing up walls etc. Lauren gets her imagination of things she has seen such as television programmes, magazines, colouring books, films, etc. ...read more.