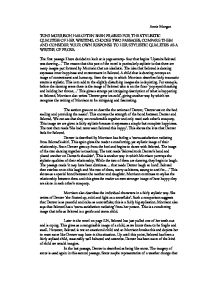 Annie Morgan TONI MORRISON HAS OFTEN BEEN PRAISED FOR THE STYLISITIC QUALITIES OF HER WRITING. CHOOSE TWO PASSAGES, COMPARE THEM AND CONSIDER YOUR OWN RESPONSE TO HER STYLISTIC QUALITIES AS A WRITER OF PROSE. The first passage I have decided to look at is page seventy- four that begins 'Upstairs Beloved was dancing...' The reason that this part of the novel is particularly stylistic is that there are many images put forward by Morrison that are idealistic. The idea that Beloved is dancing expresses inner happiness and contentment in Beloved. A child that is dancing conveys an image of contentment and harmony. Even the way in which Morrison describes fairly traumatic events is stylistic. This is to add to the slightly disturbing images she is depicting. For example, before the dancing scene there is the image of Beloved who is on the floor 'pop-eyed thrashing and holding her throat...' This gives a strange yet intriguing description of what is happening to Beloved. ...read more.

This is another way in which Morrison portrays the stylistic qualities of their relationship. While the two of them are dancing, they begin to laugh. The passage reads 'it may have been dizziness... that made Denver laugh so hard'. Beloved then catches on to this laugh and 'the two of them, merry as kittens, swung to and fro...' This shows us a special bond between the mother and daughter. Morrison continues to stylise the relationship between them and this gives the reader an even stronger image of how happy they are alone in each other's company. Morrison also describes the individual characters in a fairly stylistic way. She writes of Denver 'she floated up, cold and light as a snowflake'. Such a comparison suggests that Denver is as peaceful and calm as a snowflake; this is a fairly big stylisation. Morrison also says that Beloved has a 'warm satisfaction radiating' from her person. ...read more.

Piling itself, burying itself. Higher. Deeper' this emphasises the idea that Morrison wants the atmosphere to be stylised as well as her characters. The setting for this scene is the same as the description of her characters as it is pleasant and reflects on the still and restful. Morrison's writing appears to be a writer very interested in the stylisation of characters and settings. She tends to idealise that surroundings as well as the people within them. Morrison seems to be drawn to the calm and restful aspects of life for Sethe and her family. She reflects on the pleasant and happy times that occur. The love in each family relationship is stylised, for example, the bond between Denver and Beloved. They are extremely comfortable around each other and have a unique sisterly bond. The stylisation of Morrison's writing is apparent throughout the novel as she proceeds to idealise each setting and event, as well as her characters. Due to her style of writing, Morrison's novel is pleasant to read. The tranquillity deplored by her is inviting and satisfactory for a reader. ...read more.