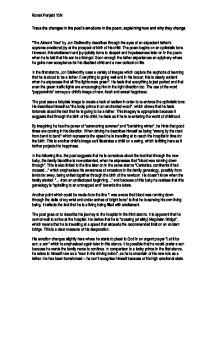 Trace the changes in the poet's emotions in the poem, explaining how and why they change.

Trace the changes in the poet's emotions in the poem, explaining how and why they change "The Almond Tree" by Jon Stallworthy describes through the eyes of an expectant father's supreme emotional joy at the prospect of birth of his child. The poem begins on an optimistic tone. However, this excitement and joy quickly turns to despair and hopelessness later on in the poem when he is told that his son is a Mongol. Soon enough the father experiences an epiphany where he gains new acceptance for his disabled child and a new outlook on life. In the first stanza, Jon Stallworthy uses a variety of images which capture the euphoria of learning that he is about to be a father. Everything is going well and in his favour; this is clearly evident when he expresses that all "the lights were green". He feels that everything is just perfect and that even the green traffic lights are encouraging him in the right direction too. The use of the word "peppermints" conveys a child's image of new, fresh and sweet happiness. The poet uses a fairytale image to create a lack of realism in order to re-enforce the optimistic tone. He describes himself as "the lucky prince in an enchanted wood", which shows that he feels fortunate about the fact that he is going to be a father. ...read more.

The imagery used here is very descriptive: for example, "bone-white", which reflects the hygiene in the hospital. Stallworthy also uses repetition here: "shuddered with the shuddering womb" and "wave after wave, wave after wave". This repetition reflects the contractions of his wife in labour. The poet ends this stanza with an abrupt "whom?", which could mean that he is unsure who this new arrival is; will it be a boy, like he hoped, or a girl? The sixth stanza uses money image, where he compares his infant to a "bright farthing". He conveys the value of this coin to this new arrival; even though it is small, it "enriches" him. He appreciates that with this coin, there is an everlasting link between its two parents. The emotion that he feels up to this point is still excitement and joy. It is in the seventh stanza however when this ecstasy twists takes a sharp turn with the words "scissored" and "slicing" which are both very harsh, piercing images, giving a sense of foreboding. This emotion is now turned to forlornness when the doctor tells him the heartbreaking truth about his child. Both of these words also indicate that his primary bonding with his son has been cut. In the next stanza, Stallworthy employs the word "bullet" to portray the pain and physical agony of learning about his child's disabilities. ...read more.

The tree is only beautiful and meaningful when the tree is in full blossom, just like life is when you accept new ideas, when you live a fuller life without a narrow prejudiced vision. He is hit with the realisation that all his life he has been wrapped and enclosed in his own views: "wrenched from the caul of my thirty years' growing". It is as if he has been "set free" from this restricted vision that he has been entrapped in his whole life and turned into a new, more accepting, human being. No matter how hard or how long it will take, he realises that he and his son would have to reach out to each other, they will "tunnel each other out". Between themselves, this is an unspoken "covenant". Through the birth of this baby, he has a new affirmation of life. He knows he has to face up to reality regardless of how painful it might be. And for the first time since he learned the distressing news about his baby, the poet refers to him as his "little mongol love", which shows that he is now affectionate towards his child. He realises that the baby might not learn as much as other children learn from their parents, but he knows that he already "learnt more from the baby's lips". He appreciates the fact that only through suffering, can happiness truly be appreciated. Ronak Punjabi 10N ...read more.