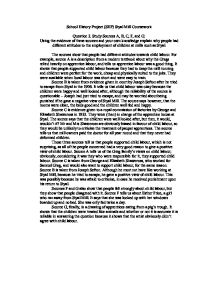 Using the evidence of these sources and your own knowledge explain why people had different attitudes to the employment of children at mills such as Styal.

School History Project (SHP) Styal Mill Coursework Question 3. Study Sources A, B, C, F, and G. Using the evidence of these sources and your own knowledge explain why people had different attitudes to the employment of children at mills such as Styal. The sources show that people had different attitudes towards child labour. For example, source A is a description from a modern textbook about why the Gregs relied heavily on apprentice labour, and tells us apprentice labour was a good thing. It shows that people supported child labour because they had to keep the mill running and children were perfect for the work, cheap and physically suited to the jobs. ...read more.

The source says however, that the rooms were clean, the beds good and the children well fed and happy. Source C is evidence given to a royal commission of factories by George and Elizabeth Shawcross in 1833. They were (then) in charge of the apprentice house at Styal. The source says that the children were well looked after, but then, it would, wouldn't it? Mr and Mrs Shawcross are obviously biased in favour of child labour, so they would be unlikely to criticize the treatment of pauper apprentices. The source tells us that mill owners paid the doctor for all year round and that they never had deformed children. ...read more.

This was possibly because he was afraid to criticise, in case he received punishment upon his return to Styal. Sources F and G also show that people felt strongly about child labour, but they show that people disagreed with it. Source F tells us about Esther Price, a girl who ran away from Styal Mill. It says that she was locked up with her windows boarded up and no bed. She was only fed twice a day. Source G, finally, is a drawing of apprentices eating from a pig's trough. It shows that the children were treated like animals and whether or not it is accurate it is reliable in answering the question because it shows that the artist obviously didn't agree with child labour. Sources ...read more.