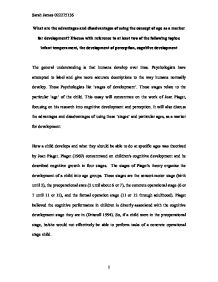 What are the advantages and disadvantages of using the concept of age as a marker for development? Discuss with reference to at least two of the following topics: infant temperament, the development of perception, cognitive development

What are the advantages and disadvantages of using the concept of age as a marker for development? Discuss with reference to at least two of the following topics: infant temperament, the development of perception, cognitive development The general understanding is that humans develop over time. Psychologists have attempted to label and give more accurate descriptions to the way humans normally develop. These Psychologists list 'stages of development'. These stages relate to the particular 'age' of the child. This essay will concentrate on the work of Jean Piaget, focusing on his research into cognitive development and perception. It will also discuss the advantages and disadvantages of using these 'stages' and particular ages, as a marker for development. How a child develops and what they should be able to do at specific ages was theorized by Jean Piaget. Piaget (1969) concentrated on children's cognitive development and he described cognitive growth in four stages. The stages of Piaget's theory organise the development of a child into age groups. These stages are the sensori-motor stage (birth until 2), the preoperational state (2 until about 6 or 7), the concrete operational stage (6 or 7 until 11 or 12), and the formal operation stage (11 or 12 through adulthood). ...read more.

Bower's study found that infants as young as 5 months had some grasp of object permanence. Bower's findings do not refute the concept of object permanence, it is still an important milestone in child development, he just argues that it happens earlier than 8 months. With Bower's results of the object permanence task in mind, the very nature of the stage theory can be criticized. The stages could be inaccurate or even wrong. A child could recognize that objects continue to exist, and still fail at Piaget's task as they do not yet have the intellectual ability to remove the blanket and retrieve the toy. Also, the performance of the child could be improved by setting it in a familiar context or surrounding. Later research by Piaget was at the preoperational stage. Children's thinking in this stage is characterized by what Piaget called moral realism (Sylva & Lunt, 1990). Piaget conducted various conservation tasks. Conservation requires the awareness that an object remains the same even though its appearance changes. Conservation can be relevant to concepts such as length, number, substance, liquid and area. In the usual test for conservation of number a child sees two identical rows of coins. ...read more.

In conclusion, most children do not learn or understand problems and ideals at the same rate. Children react differently to their surroundings and can perform better at certain tasks if that particular task involves something they can relate to, for example, the naughty teddy. This is a major disadvantage when using age as a marker for development as the child may be expected to act a certain way or produce different results than expected. Many of the criticisms of Piaget surround his underestimation of childhood capabilities and also the age at which the cognitive developments are said to take place. There are obviously many advantages to using the age as a marker for development, with reference to Piaget's stage theory. Many developmental psychologists use related age boundaries to discern the developing periods in a child's life. Also, many schools have revised their teaching approach and are now using Piagetian principles in the classroom. (Driscoll 1994). While possibly not wholly precise, Piaget's stage theory nonetheless provides a thorough explanation of the order in which Western children seem to develop and can be used by carers and teachers alike to aid their child's development throughout the different ages of its life. ...read more.