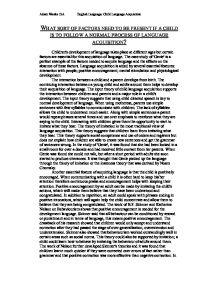 What sort of factors need to be present if a child is to follow a normal process of language acquisition?

WHAT SORT OF FACTORS NEED TO BE PRESENT IF A CHILD IS TO FOLLOW A NORMAL PROCESS OF LANGUAGE ACQUISITION? Children's development of language takes place at different ages but certain factors are essential for this acquisition of language. The case study of 'Genie' is a perfect example of the factors needed to acquire language and the effects on the absence of these factors. Language acquisition is aided by several essential features: interaction with people; positive encouragement; mental stimulation and physiological development. The interaction between a child and a parent develops from birth. The continuing interaction between a young child and adults around them helps to develop their acquisition of language. The input theory of child language acquisition supports the interaction between children and parents and a major role in a child's development. The input theory suggests that using child directed speech is key to normal development of language. When using motherese, parents use simple sentences with few syllables to communicate with children. The lack of syllables allows the child to understand much easier. Along with simple sentences a parent would repeat phrases several times and use over emphasis to reinforce what they are saying to the child. Interacting with children gives them the opportunity to start to imitate what they hear. ...read more.

This theory could also be supported by imitation; a child could learn how to behave by imitating the behaviour of adults around them. The work of Nelson further developed Skinner's theories and it was found that children learnt much quicker if they were corrected over errors of fact rather than grammar and that positive correction was more effective than negative correction. In the case of Genie she was never encouraged to talk and was punished brutally for any mistake she made. After Genie was found she was given encouragement but the effects of her punishment stayed with her for a long time after her liberation. As a child gets older a major part of vocabulary development is from the ability to ask, "what's that". Introducing a child to different environments allows the stimulation of the child's mind. When going out into the wider world a child has the opportunity to ask what something is. This process allows the child to associate new words with different object. Children learn at this stage that objects can exist outside their viewpoint and stop using underextension. This allows the child to link inanimate objects to names that would have previously been lost. ...read more.

The case study of Genie is another good example of how her neglect contributed to her not being able to speak. Genie was given a diet of mashed up food therefore wasn't able to develop the necessary muscle needed to produce speech. In addition to her bad diet Genie could have been mentally retarded and that maybe a reason for her not progressing after she was rescued. Scientists did not find out whether the problems that Genie had were from birth or whether they were acquired through her neglect. The combination of interaction with people, mental stimulation, positive encouragement and physical development all play a major role in language acquisition. Genie was deprived of all these factors for many years and was found and taught to speak. Unfortunately Genie didn't progress past the two or three word stage. When Genie was found she had reached Lennenberg's 'critical age' and her story suggests that what he said was true and a child needs to acquire language before puberty in able to progress normally. Other cases such as 'Victor' and the 'Czech Twins' all support Lennenberg's theory as they were found before his 'critical age' and after integration into society progressed normally after a few years. Adam Weeks 12A English Language: Child Language Acquisition ...read more.