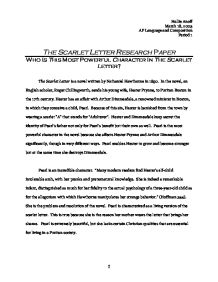 Who Is This Most Powerful Character In The Scarlet Letter?

Hallie Anoff March 18, 2003 AP Language and Composition Period 1 THE SCARLET LETTER RESEARCH PAPER Who Is This Most Powerful Character In The Scarlet Letter? The Scarlet Letter is a novel written by Nathaniel Hawthorne in 1850. In the novel, an English scholar, Roger Chillingworth, sends his young wife, Hester Prynne, to Puritan Boston in the 17th century. Hester has an affair with Arthur Dimmesdale, a renowned minister in Boston, in which they conceive a child, Pearl. Because of this sin, Hester is banished from the town by wearing a scarlet "A" that stands for "Adulterer". Hester and Dimmesdale keep secret the identity of Pearl's father not only for Pearl's benefit but their own as well. ...read more.

Pearl is the representation of Hester's ambiguity. Pearl's devilish ways represent Hester's wild, sinful side. "If she was spoken to, she would not speak again. If the children gathered about her, as they sometimes did, Pearl would grow positively terrible in her puny wrath, snatching up stones to fling at them, with shrill, incoherent exclamations that madder her mother tremble, because they had so much sound of a witch's anathemas in some unknown tongue." (Hawthorne 63) "She seemed rather an airy sprite, which, after playing its fantastic sports for a little while upon the cottage-floor, would flit away with a mocking smile. Whenever that look appeared in her wild, bright, deeply black eyes, it invested her with a strange remoteness and intangibility; it was as if she were hovering in the air and might vanish, like a glimmering light that comes we know not whence, and goes we know not whither. ...read more.

"Mother and daughter stood together in the same circle of seclusion from human society; and in the nature of the child seemed to be perpetuated those unquiet elements that had distracted Hester Prynne before Pearl's birth, but had since begun to be soothed away by the softening influences of maternity." (66) Roger Dimmesdale is a Puritan reverend who committed adultery. This makes him a hypocrite. He can't preach to his congregation when he, himself, does not even abide by the Puritan laws. This inability to take responsibility destroys him. Pearl's questioning makes him look childish. In order for pearl to become human, Dimmesdale must confess the secret. "The salvation of Pearl depends upon Dimmesdale. Until he acknowledges himself her father she can have no human patrimony, and must remain a Nature-spirit, untouched by the redemptive order that was broken in her conception." (Hoffman 348) I ...read more.