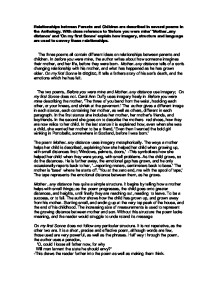 With close reference to 'Before you were mine' 'Mother..any distance' and 'On my first Sonne' explain how imagery, structure and language are used to convey these relationships.

The mother is 'base' where he starts off. 'You at the zero end, me with the spool of tape,' The tape represents the emotional distance between them, as he grows. Mother ..any distance has quite a simple structure. It begins by telling how a mother helps with small things; as the poem progresses, the child goes onto greater distances, and heights, until finally they are reaching out, needing to leave. To be a success, or to fail. The author shows how the child has grown up, and grown away from his mother. Starting small, and ending up at the very top peak of the house, and the end of his childhood. The increasing size of measurements is used to represent the growing distance between mother and son. Without this structure the poem lacks meaning, and the reader would struggle to understand its message On my first Sonne does not follow any particular structure. ...read more.

Ben Jonson, in some places writes as if he was talking to him son, it seems as though he assumes that the boy can read his words. He calls his son the child of his 'right hand' these ideas suggest the boy is of great worth and also that he would have been as his father, the writer's heir. An image which comes from the Bible. It reflects ancient cultures, how Jesus is shown as sitting at God's right hand. Before you were mine describes, in each stanza a little more of the image of the mother, each stanza is different, and this is effective, as each has it's own little story, and image. The author also reminds you in each paragraph, that the mothers child is not yet born, and it is only their imagination. The poem flows well, and she uses the title as the last phrase of the poem, 'Where you sparlkle and waltz and laugh before you were mine' - this is a very effective ending, and completes the poem well. ...read more.