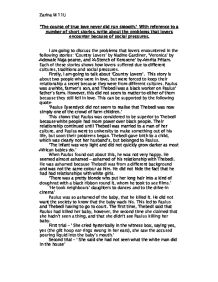 With reference to a number of short stories, write about the problems that lovers encounter because of social pressures.

'The course of true love never did run smooth.' With reference to a number of short stories, write about the problems that lovers encounter because of social pressures. I am going to discuss the problems that lovers encountered in the following stories: 'Country Lovers' by Nadine Gardiner, 'Veronica' by Adewale Maja-pearce, and 'A Stench of Kerosene' by Amrita Pritam. Each of these stories shows how lovers suffered due to different cultures, traditions and social pressures. Firstly, I am going to talk about 'Country Lovers'. This story is about two people who were in love, but were forced to keep their relationship a secret because they were from different cultures. Paulus was a white, farmer's son, and Thebedi was a black worker on Paulus' father's farm. However, this did not seem to matter to either of them because they still fell in love. This can be supported by the following quote- 'Paulus Eysendyck did not seem to realise that Thebedi was now simply one of the crowd of farm children.' This shows that Paulus was considered to be superior to Thebedi because white people had more power over black people. ...read more.

'Her family had been even poorer than mine.' Okeke became a doctor and moved away to the city, whereas Veronica stayed in the village and took care of her brothers and sisters until they too, moved away. "What about your brothers and sisters?' 'They are gone, all of them." Veronica got married and had a baby. Okeke comes back after some time, and suggests that she moves to the city, where she can improve her skills and get a well-paid job. However, she refuses to do so, because she feels that it is her duty to stay in the village and care for her husband and child. "Yo would be better off in the city.' 'This is my home, Okeke" Veronica has the chance to go and make something out f her life, but instead of taking these chances, she simply states that the village is her home and she can't leave due to the duties that she has. "Yo can go to night school and become a secretary,' I said. She shook her head, 'I leave that to others, my own place is here." This can be seen as discrimination relative to gender. ...read more.

Guleri deals with this ordeal by killing herself. "When she heard of your second marriage, she soaked her clothes in kerosene and set fire to them." This shows that Guleri knew that she could do nothing about the situation, as it was necessary for them both to obey and respect Manak's mother and her wishes. She couldn't handle this and was pressured into killing herself because she thought that there was no point in going on without love. In the end, Manak's new wife gives birth to a baby boy, which makes his mother extremely happy, but Manak is far from happy. 'Manak began to scream. "Take him away!" he shrieked hysterically.' This story shows how lovers have to suffer because they have little control over their lives, due to the fact that they are obliged to do what is expected by their elders and by culture. All the stories that I have discussed have proved that the course of true love never did run smooth. They show that lovers are pressurised by culture and the societies in which they lived. This meant that were unable to have a successful relationship. I agree that in the stories, the characters find their relationship problematic, due to cultural and social pressures. Zarina M 11U ...read more.