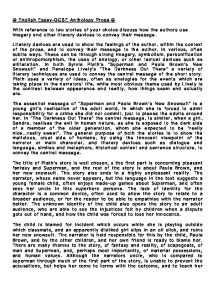 With reference to two stories of your choice discuss how the authors use imagery and other literary devices to convey their message.

:) English Essay-GCSE Anthology Prose :) With reference to two stories of your choice discuss how the authors use imagery and other literary devices to convey their message. Literary devices are used to show the feelings of the author, within the context of the prose, and to convey their message to the author, in various, often subtle ways. These can be through strong imagery, symbolism, personification or anthropomorphism, the uses of analogy, or other textual devices such as alliteration. In both Sylvia Plath's "Superman and Paula Brown's New Snowsuit" and Penelope Lively's "The Darkness Out There" a variety of literary techniques are used to convey the central message of the short story. Plath uses a variety of ideas, often as analogies for the events which are taking place in the narrators' life, while most obvious theme used by Lively is the contrast between appearance and reality, how things seem and actually are. ...read more.

The title of Plath's story is well chosen, s the first part is concerning pleasant fantasy and Superman, and the rest of the story is about Paula Brown, and her new snowsuit. The story also ends in a highly unpleasant reality. The narrator, whose name never appears, but the language in the text suggests a young female child, often enjoys made-up games about Superman, and often sees her uncle in this superhero persona. The lack of identity for the character is a common device, often used to allow the story to relate to a broader audience, or for the reader to be able to empathise with the narrator better. The unknown identity of the child also opens the story to an adult audience, who are able to see the injustices felt by children when a dispute gets out of hand, and how the child was forced to lose her innocence. ...read more.

The story uses explicit comparisons and also implies many meanings. Some of the similes used suggest strong feelings, while others are more ambiguous. The beginning world in which the child lives in is later shown to be a fantasy world, where superheroes are like her uncle, ad where little harm can befall her. This is shown by the fantasies of Superman and only brief mentions of the ongoing war. However this is later replaced by more definite occasions of violence and upset, while the narrator describes the fantasies to disappear "like the crude drawings of a child". There are also some suggestions of the child originating from Germany, or having German family, which may be a reason for the readiness of the others to blame her, as Germans were often scapegoated for WWII, in America. ...read more.