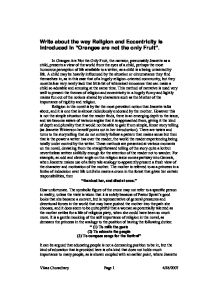 Write about the way Religion and Eccentricity is introduced in &amp;#147;Oranges are not the only Fruit&amp;#148;.

Write about the way Religion and Eccentricity is introduced in "Oranges are not the only Fruit". In Oranges Are Not the Only Fruit, the narrator, presumably Jeanette as a child, presents a view of the world from the eyes of a child, perhaps the most humorous perception of life available to a writer, as a child is a being untainted by life. A child may be heavily influenced by the situation or circumstance they find themselves in, as in this case that of a hugely religion-oriented community, but they nonetheless very rarely lack that little bit of whimsical innocence that can make a child so adorable and amusing at the same time. This method of narrative is used very well to present the themes of religion and eccentricity in a hugely funny and lightly makes fun out of the notions shared by characters such as the Mother of the importance of rigidity and religion. Religion in the novel is by far the most prevalent notion that Jeanette talks about, and it is one that is almost ridiculously endorsed by the mother. However this is not the simple situation that the reader finds, there is an emerging depth to the issue, and we become aware of various angles that it is approached from, giving it the kind of depth and plurality that it would not be able to gain from simple, linear story telling (as Jeanette Winterson herself points out in her introduction). ...read more.

"'You can tell someone by their shoes.' My mother said. 'Look at Next Door.'" There are two important points in this line; firstly, the declaration the mother makes. You can tell someone by their shoes. It is not a suggestion or anything remotely near one. It is a bald statement, as though there is no possible question that the mother is wrong. Of course, this is ridiculous. Where there can be some things that can be deduced by the state of ones shoes, which is a far cry from the suggestion that one can judge a person on the basis of the state of their shoes. "She was wrong, as far as we were concerned, but right as far as she was concerned, and really, that's what mattered." It is typical of the kind of attitude that the mother has throughout the novel, about her absolute correctness in most matters, as she is God's representative on earth?. This is also delving into the issue of eccentricity. By anybody's standards the mother is a little odd, although the bounds of normality are so ill defined. An example of her eccentricity is an extension of her belief of her utility, as a representative of God's will on earth, by raising Jeanette. " My mother...dreamed a dream...she would get a child, train it, build it, dedicate it to the Lord..." ...read more.

does not give a good impression of him, and through him of the church. As he is a doddering fool, so the church is incompetent at handling the reality of life, dazzling its patrons with promises of glory and resurrection, but not delivering anything concrete apart from promises of what will come when one dies. This is a blind faith, and it seems that through her own more simplistic ways Jeanette recognises this on a less conscious level and so does not feel the awe or the fear of the church as her mother has. She simply does as the church says through lack of initiative that is of course not available to children of her age or upbringing. This is because despite being so whimsically, innocently critical, she is still heavily influenced by her mother. "...so I learned to interpret the signs and wonders that the unbeliever might never understand." So we are left at the end of the first chapter, with a bellyful of eccentricity and religion that seems to be the ruling passions for the pages to come. It nicely sets up a story about growing up, the age of the narrator being the only linear indication of progression, and as such the opening chapter deals very well with the issues raised by the background of the religion and the eccentricity of the individuals involved. ? At least so she thinks Vikas Chowdhary Page 1 4/28/2007 ...read more.