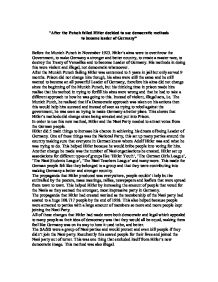 &amp;#147;After the Putsch failed Hitler decided to use democratic methods to become leader of Germany&amp;#148;

"After the Putsch failed Hitler decided to use democratic methods to become leader of Germany" Before the Munich Putsch in November 1923. Hitler's aims were to overthrow the Government, to make Germany a stronger and better country, to create a master race, to destroy the Treaty of Versailles and to become Leader of Germany. His methods in doing this were violent and illegal, not democratic whatsoever. After the Munich Putsch failing Hitler was sentenced to 5 years in jail but only served 9 months. Prison did not change him though, his aims were still the same and he still wanted to become an all powerful Leader of Germany, therefore his aims did not change since the beginning of the Munich Putsch, but his thinking time in prison made him realise that his method in trying to forfill his aims were wrong and that he had to take a different approach to how he was going to this. ...read more.

This helped Hitler because he would bribe people into voting for him. Another change he made was the number of Nazi organisations he created. Hitler set up associations for different types of groups like 'Hitler Youth', 'The German Girls League', 'The Nazi Students League', 'The Nazi Teachers League' and many more. This made the German people felt like they belonged to a group and that they were contributing into making Germany a better and stronger country. The propaganda that Hitler produced was everywhere, people couldn't help but be enthralled by the posters, mass meetings, rallies, newspapers and leaflets that were spread from town to town. This helped Hitler by increasing the amount of people that voted for the Nazis as they seemed the strongest, most impressive party in Germany. ...read more.

Resultantly this scared people for their lives and joined the Nazi party out of terror. This was one thing that excluded itself from Hitler's new democratic image. This method was also illegal. To answer the question, it can therefore be seen that Hitler did use democratic methods to become the leader of Germany. However, it is also important to see that although he did use democratic methods, it did not necessarily mean that democracy was one of his strong beliefs. Adolf Hitler did not really believe in democracy and his methods were simply a way of winning the votes of the German people. It is important to remember that Hitler's aims were still the same from before the Munich Putsch, its just his methods in forfilling those aims that had changed and had won him the right to finally proceed with his actions, resulting to the Leadership of Germany and what was soon to be, attempted world domination. ...read more.

The structure of the student's essay is very good and consequently aided the fluency of the essay. The argument was very evident and well supported and hence, the conclusion was very strong. However, the introduction failed to give an overview ...

The structure of the student's essay is very good and consequently aided the fluency of the essay. The argument was very evident and well supported and hence, the conclusion was very strong. However, the introduction failed to give an overview to answering the question and the student has adopted a systematic and chronological approach to answering the question instead - demonstrating knowledge of what happens before, then during and after. I would suggest that the introduction needs to address the question immediately - i.e. by suggesting (as the student later implies) that the methods Hitler used were changed to being democratic because it would gain him more support but as always, there were also other things that tied in to help Hitler pave his way to becoming leader of Germany. This latter point, is something many students forget to address (or 'skim' over the details) but this student has done well not to fall into this common pitfall.

The student gives many examples to back up their argument which is great, but is actually superfluous. One or two is enough to demonstrate the understanding and to illustrate a point in the argument. On the other hand, if one of the examples were explained further (this essay demonstrates a good attempt) then the marks will be higher. One thing I personally felt was missing from the essay was the writing of "My Struggle" by Hitler during his months in prison. I believe that through the book, others were able to understand Hitler more and gained him fame - likewise the Putsch also put Hitler into a new peak in his bid to change Germany. This said, a strong conclusion and argument was still very evident. Yet, I would disagree to the concluding line of Hitler's "world domination" as I would argue that Hitler's main aim was always race purity which would lead to world domination rather than world domination alone (a slight difference to that suggested by the student).

Apart from one spelling mistake and a few questionable comma usages, the grammar and spelling are sound in this essay. The student has used the appropriate terms in the essay and followed a typical structure for the essay (chronological). Where marks fall in this essay is the failure of developing the examples made - the student writes well and needs to clarify the argument more and cannot assume that the examiner is able to see what they are implying in the essay.