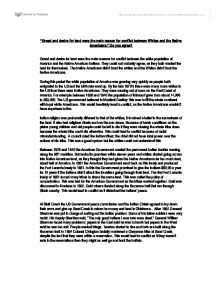 &amp;#147;Greed and desire for land were the main reason for conflict between Whites and the Native Americans.&amp;#148; Do you agree?

"Greed and desire for land were the main reason for conflict between Whites and the Native Americans." Do you agree? Greed and desire for land were the main reasons for conflict between the white population of America and the Native American Indians. They could not mutually agree, as they both wanted the best for themselves. The Native Americans didn't trust the whites and the Whites didn't trust the Native Americans. During this period the white population of America was growing very quickly as people both emigrated to the US and the birth rate went up. By the late 1870's there were many more whites in the US than there were Native Americans. They were running out of room on the East Coast of America. For example between 1830 and 1840 the population of Missouri grew from about 14,000 to 353,000. The US government believed in Manifest Destiny: this was to fill the whole continent with loyal white Americans. This would inevitably lead to conflict, as the Native Americans wouldn't have anywhere to live. Indian religion was profoundly different to that of the whites, it involved a belief in the sacredness of the land. It also had religious rituals such as the sun dance. Because of harsh conditions on the plains young children and old people could be left to die if they were slowing the whole tribe down because the whole tribe could die otherwise. ...read more.

This would lead to conflict as if they weren't safe in the reservations then they might as well go and hunt the buffalo. This was followed by the Fort Lyon treaty in 1861. This agreed to give the Indians reservations along the Oregon Trail, stop attacking the whites and made the Indians abandon land given to them in the Fort Laramie treaty. In March 1867 the Government decided to bring an end to the policy of concentration and introduce a new policy of small reservations. The government decided to introduce this new policy because they didn't want the Indians working together as this was a real danger to the whites and also the whites needed more land. This was new as the tribes were split up into smaller groups and the Government gave them food. This was written because the Indians were killing people that went across their land. The second Fort Laramie treaty was made in 1868. In this the Indians agreed to move to Dakota and leave the whites alone, they also got their old hunting ground back.. Red Cloud felt pleased with the treaty as the whites gave up more than the Indians. Other tribes couldn't live as they used to, as they had nowhere to hunt the buffalo, as their reservations were so small. ...read more.

The Government offered $6 million to the Indians if they moved out of the Black Hills. The Sioux said no to this offer and the government warned that if they were not gone in 60 days they would be killed. Red Cloud, Crazy Horse and Sitting Bull had 60 days to prepare for war. Sitting Bull and Crazy Horse really believed they could defeat the whites for good. They did defeat them at both the Rosebud River and the Little Bighorn. In May 1869 the first railroad was completed across America others would follow making emigration to the west and to the plains much easier. This would lead to conflict as the railroad was going across Indian land and made it easier for white people to live on the plains. During the 1860's and 70's both farmers and rancher began to move to the plains in large numbers. The government encouraged this as it was fulfilling manifest destiny. Technical problems were solved during the 1870's and 80's. Now the plains were far more attractive to live on. This would lead to conflict, as the Indians would have nowhere to live. To conclude greed and desire for land, particularly on the part of the white Americans were the main reasons for conflict between whites and the Native Americans. By the late 1870 there were many more whites in America than Native Americans and the whites needed a lot of land, as they were mostly farmers. ...read more.

This essay is superbly detailed and the examiners will credit this depth of knowledge and understanding. It could be even better if the information was organised and this would be helped by planning. In an exam there is not enough time to go into this kind of depth so it is better to select a few key points and explain them fully.