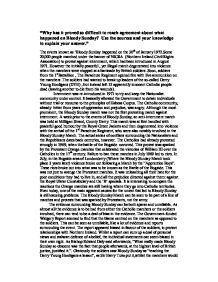 &amp;#147;Why has it proved so difficult to reach agreement about what happened on Bloody Sunday? Use the sources and your knowledge to explain your answer.&amp;#148;

"Why has it proved so difficult to reach agreement about what happened on Bloody Sunday? Use the sources and your knowledge to explain your answer." The events known as 'Bloody Sunday happened on the 30th of January 1972.Some 20,000 people marched under the banner of NICRA (Northern Ireland Civil Rights Association) to protest against internment, which had been introduced in August 1971. However the initially peaceful , yet illegal march degenerated into violence when the marchers were stopped at a barricade by British soldiers .Soon, soldiers from the 1stBattallion , The Parachute Regiment opened fire with live ammunition on the marchers .The soldiers had wanted to break up leaders of the so-called Derry Young Hooligans (DYH) , but instead left 13 apparently innocent Catholic people dead (leaving another to die from his wounds). Internment was re-introduced in 1971 to try and keep the Nationalist community under control. It basically allowed the Government to detain individuals without trial or recourse to the principles of Habeas Corpus. The Catholic community, already bitter from years of oppression and prejudice, was angry. Although the most prominent, the Bloody Sunday march was not the first protesting march against internment. A week prior to the events of Bloody Sunday, an anti-internment march was held at Milligan Strand, County Derry. This march was at first handled with peaceful good humour by the Royal Green Jackets and then degenerated into violence with the arrival of the 1st Parachute Regiment, who were also notably involved in the Bloody Sunday March. The actual series of conflicts surrounding the Nationalists and the Republicans dates back centuries, however. The Catholics had already protested strongly in 1969, when the battle of the Bogside occurred. This protest was sparked by the Protestant Orange marches that celebrated the victories of William III over the Catholics in the 17th century. Failure to ban these marches in July 1969 led to riots. In July, in the Bogside area of Londonderry (Where the Bloody Sunday March took place 3 years later) ...read more.

reporter. It would be hard for someone to alter a reporter's evidence without arousing suspicion of bias, despite the biased nature of the man. But with the Paratroopers, this evidence proves to some extent that the Paratroops were excessively violent: this is 'proved by the fact that the paratroops "were only brought back to a sense of discipline when their NCO'S began wielding their batons fiercely on their own men." It would seem that the main purpose of this is to create interest in Bloody Sunday and to challenge Widgery. However the potential for bias is still there, and there are several places that the source does not totally cover the issue. The source neglects to mention if the firing of rubber bullets was standard at the time, or indeed if it was this violence that inspired the step-up to live ammunition in Bloody Sunday a week later. In some ways this source is backed up by the video source D. But in general it is a reliable source, which is not developed enough or free of bias enough to warrant it definitive. Source G is taken from the same book. In this source Tim Pat Coogan describes a meeting that took place between Lieutenant General Harry Tuzo and Faulkner, the Northern Ireland Prime Minister. He relies here on evidence gathered by Martin Dillon in his book, published in 1995. The evidence states that Tuzo did not want to use excessive force, but Falkner convinced him that force was needed to deal with the trouble makers. Whilst this source could be useful, it does not mention where the meeting took place. And Tuzo may have been briefed by General Ford : would this have made a difference, could Ford really give orders like this? Something as serious as this would surely be made at the top. Yet the idea of Faulkner's 'Hard line' is backed up by Source D- making this a fairly reliable despite the Republican nature of the author. ...read more.

the events on Sunday, January 1972... taking into account of any new information relevant to events on that day." This inquiry, headed by Lord Saville of Newdigate, has been called the 'Saville inquiry' and has access to a wide range of powers including the authority to subpoena witnesses and compel the disclosure of documents in line with the 1921 Tribunal of Inquiry Act. This report is now facing a developed problem (like the Ireland issue itself), that the truth, if found out, may anger Nationalist communities even more than Widgery did. These are the difficulties facing the Saville inquiry, if its purpose is to give a fair evaluation. Consider also the fact that much of the evidence has been destroyed, and several witnesses have died. If this report is really genuine, then it could have been better done near the time. As I have noticed, the problem of finding unbiased evidence with which to evaluate Bloody Sunday is as significant as the event itself. Most of the eyewitness statements are from one side or another, either Nationalistic or British. If there was more relation between some of the statements on either side, we might have the truth by now. The problem of bias is central to the whole Ireland debate. Whilst for a lot of the time, Britain has made all the choices for Ireland, the introduction of things like Gladstone's Home Rule Bill has widened the range of options for Ireland, but have got through political prejudice to get there. Because politicians will invariably have vastly differentiating opinions, the route for Ireland will never be certain. Certainly it will mean direct conflict between Loyal Protestants and the largely Nationalist Catholic community. While the peace process continues, the IRA are still about and in force, and the Stormont parliament has lots of conflict to resolve. It would seem that time, ever since the first invasions in 1598, has wound up too complicated and conflicting a knot for the British or the Irish to untie. ...read more.