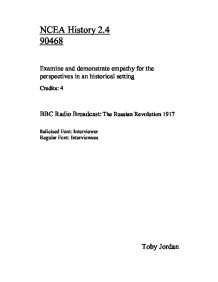 NCEA History 2.4 90468 Examine and demonstrate empathy for the perspectives in an historical setting Credits: 4 BBC Radio Broadcast: The Russian Revolution 1917 Italicised Font: Interviewer Regular Font: Interviewees Toby Jordan "Good evening. The time is eleven minutes past seven. Thank you for joining us this evening on the BBC. I am Geoffrey Allister, your host for this evening's current affairs programe. Tonight on the show we have Miss Spohia Cambell reporting on the latest in German U-Boat development, and Phillip Wright with his article on the Allied Victory at Caporetto. But first, BBC Russian Correspondant Mr Toby Jordan, who has braved himself through the violent Russian Revolution this month, joins us to bring us the truth behind what is happening in Russia. Mr Jordan..." "Thank you Mr Allister. Good evening Britain. I am Toby Jordan, joining you live from the streets of Petrograd, Russia. Recently the capital of Russia, Petrograd itself, was rocked by a series of troublesome events in the November. I am currently prowling the streets in hopes of finding locals to share their perspectives on the recent revolution. Excuse me sir" (Calling to a passer nearby) "Yes" "Would you mind sparing a moment of your time to tell us a little bit about your role in the revolution?" "Certainly." ...read more.

It is stupid for us to be fighting inside Russia while there is a large scale war going on abroad and on our borders. Our interests need to lie in ensuring our troops come out of this war victorious, instead of fighting amongst each other internally. This is a time of need! How can we win a war while our soldiers are having to protect our cities from the very people they are fighting to save on our borders." "How have you acted in response to the revolution?" "I had finally had enough of Lenin and the other Bolsheviks stirring up trouble in my factory and decided that action needed to be taken. After all, all those evil Bolsheviks are is a gang of German agents attempting to destroy our country from within. I let my factory workers know that if they wanted to take part in Bolshevik demonstrations or support them in any way, then they were not welcome to work in my factory. Still, some workers defied me and I had to make a stand. Workers were fired to prove to the other men that I meant business. (Bursts out crying) Damn Bolsheviks! ...read more.

The Bolsheviks seem to care more for the city folk than for the honest farmers like myself. I am afraid that we will go back to a Village Commune like we had many years ago. I want to have control over my land! Not lose it! Maybe the Bolsheviks can deliver? Hopefully they can." "What actions did you take during the revolution?" "I finally had had enough of the menacing Provisional Government stealing all of my supplies so I decided to stop producing food for them. In this way I was revolting as I was no longer giving the Provisional Government my support and I could also now feed my own family. The Provisional Government was no longer going to be getting all of my food! It is mine! "Now you have heard it all. The wide range of perspectives surrounding this troublesome topic. From a factory worker who believes the Revolution is good, to a factory owner who hates the Revolution. And from the former Prime Minister of Russia who loves the Bolsheviks as much as he loves animal dung, to a farmer who is confused about what he will get out of the Revolution. I have given you their stories, but now it is up to you to decide; is the Bolshevik takeover good or bad? Good evening Britain. BBC foreign correspondent Toby Jordan, Petrograd, Russia. Thank you" ...read more.