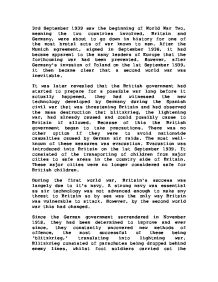 3rd September 1939 saw the beginning of World War Two, meaning the two countries involved, Britain and Germany, were about to go down in history for one of the most brutal acts of war known to man.

3rd September 1939 saw the beginning of World War Two, meaning the two countries involved, Britain and Germany, were about to go down in history for one of the most brutal acts of war known to man. After the Munich agreement, signed in September 1938, it had became apparent to the many leaders of Europe that the forthcoming war had been prevented. However, after Germany's invasion of Poland on the 1st September 1939, it then became clear that a second world war was inevitable. It was later revealed that the British government had started to prepare for a possible war long before it actually happened, they had witnessed the new technology developed by Germany during the Spanish civil war that was threatening Britain and had observed the mass destruction that blitzkrieg, the lightening war, had already caused and could possibly cause to Britain if allowed. Because of this the British government began to take precautions. There was no other option if they were to avoid nationwide casualties caused by German air raids. The most well-known of these measures was evacuation. Evacuation was introduced into Britain on the 1st September 1939. It consisted of the transporting of children from major cities to safe areas in the country side of Britain. These major cities were no longer considered safe for British children. ...read more.

Britain would then be alone in the event of an attack and along with that the German luftwaffe were only 22 miles away from Britain giving Britain a clear disadvantage. Germany began to re-arm in 1935, after agreeing to do so in an agreement with Britain. To support this, in the same year Germany introduced conscription. Also, the luftwaffe were re-arming very quickly; a lot quicker than the British air force. This was another reason for the introduction of evacuation. If the luftwaffe became more powerful than the RAF, which was looking possible, this would give Britain the inability to sufficiently defend itself in the event of an air attack. The major target for the luftwaffe was the major cities of Britain. This was because of the dense population, if the main cities were attacked then the whole country would be made aware of the severity of Britain's troubles, this would lower morale. Also, munitions factories were set in the city, if these were targeted and struck then this would reduce the resources available to Britain. Another main reason for the government to introduce evacuation into Britain was that it would free the parents of children to play their part in the effort against Germany whilst not having their children to distract them. Britain also felt it was necessary for the positive economic effects it would have. ...read more.

For example, 'blackout.' In this people were to blacken out all of their windows so that Germans would not be able to see their targets in the dark. For this, anything could be used, as long as the light from inside the house did not leave. It was left up to the occupants of the house to deal with this however they wanted. Along with the blackout, more direct precautions were introduced to deal with the German threat first hand. The gas mask was issued to everybody, it even became an offence not to carry one, though gas was never used. Bomb shelters were another form of primary protection; there was two types of shelter, the Anderson shelter and the Morrison shelter. People in the city were advised to use suitable buildings that were already there, to avoid having to overspend war funds on bomb shelters. Blackouts were used to keep light invisible from any German attack, this was also done by removing streetlamps and headlights from motor vehicles. Sign posts were removed also, to confuse any Germans lost or strategically placed behind our lines. The British government introduced evacuation into it's major cities as one of many precautionary methods that was used to protect the millions of innocent civilians and to take as many steps necessary to prevent the deadly aerial assaults that Germany had the potential to unleash, which would destroy Britain and a majority of it's population. ...read more.