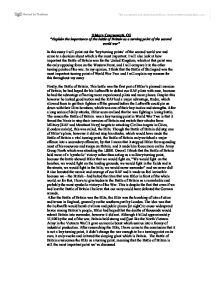 History Coursework, Q3 "Explain the importance of the battle of Britain as a turning point of the second world war" In this essay I will point out the 'key turning points' of the second world war and come to a decision about which is the most important. I will also look at how important the Battle of Britain was for the United Kingdom, which at that point was the only opposing force on the Western Front, and I will compare it to the other turning points of the war. In my opinion, I think that the Battle of Stalingrad was the most important turning point of World War Two and I will explain my reasons for this throughout my essay Firstly, the Battle of Britain, This battle was the first part of Hitler's planned invasion of Britain, he had hoped for his Luftwaffe to defeat our RAF pilots with ease, because he had the advantage of having more experienced pilots and more planes. Despite this however he lacked good tactics and the RAF had a major advantage, Radar, which allowed them to get their fighters off the ground before the Luftwaffe could pin us down with their Dive-bombers, which was one of their key tactics and strengths. After a long series of daily attacks, Hitler soon realised that he was fighting a losing battle. The reason the Battle of Britain was a key turning point in World War Two is that it forced the Nazis to stop their invasion of Britain and switch their attacks from Military (RAF and Merchant Navy) ...read more.

However, it isn't as important as most other key points, it didn't force us to surrender and it didn't turn the tide of the war, and it didn't stop us fighting, so in my opinion the evacuation of Dunkirk wasn't as important a turning point as the Battle of Britain. The fall of France, this is a important turning point in World War Two because it was the fall of the last free nation on mainland Europe to the Nazis, which left only the United Kingdom as the last of the European Allies still fighting in the War, The fall of France meant that Britain was left alone to hold off the German war machine, because at that time the Americans hadn't joined in the War. The fall of France also meant that Germany was able to make their famous pincer movement around Britain, using Norway to base fighter planes and surround the east coast and France to block The Channel and West coast, This meant that Merchant ships were prone to attacks by the Luftwaffe and as the Germans settled into France, they started to dock U-boats and big destroyers on the West coast of France, this meant that the Nazi naval fleet could advance further into the Atlantic and sink Merchant ships before they could even get close to the protection of the RAF. However, the fall of France came quite swiftly to the Germans and the French didn't put up much of a fight due to the fact that their best troops had been sent north and quickly encircled. ...read more.

So in conclusion, the defeat of Stalingrad would have lost us the War because it would have stopped Stalin and then Hitler would have been able to use Russia's resources to defeat his remaining rivals. In conclusion the battle of Stalingrad brought about a greater amount of changes and had a larger impact on the war than any other turning point I have mentioned; therefore it would seem that it was the most important turning point of the war. Certainly, in comparison to the battle of Britain its impact is more for gloating and its military impact is unsurpassed. As a symbolic victory however, the Battle of Britain eclipses most other events in World War Two. The courage of Britain and the strength and determination of the British people encouraged people across Europe and the Atlantic to continue to fight and as a result persuaded the Americans to join in more actively. It acted as a light to all those fighting Germany that the Nazis could be repelled and it was the first time that people actually realised that the German war machine could be defeated. In this way it could be argued that the most important military turning point of the Second World War was the German defeat at Stalingrad, however the most important turning point for morale and the people fighting in Western Europe was that one small country that stood alone against the juggernaut that was Nazi Germany and beat them back at the Battle of Britain Lewis Burroughs 11 Newman History Coursework ...read more.