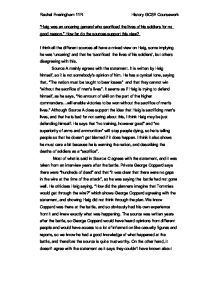 Haig was an uncaring general who sacrificed the lives of his soldiers for no good reason. How far do the sources support this view?

"Haig was an uncaring general who sacrificed the lives of his soldiers for no good reason." How far do the sources support this view? I think all the different sources all have a mixed view on Haig, some implying he was 'uncaring' and that he 'sacrificed the lives of his soldiers', but others disagreeing with this. Source A mainly agrees with the statement. It is written by Haig himself, so it is not somebody's opinion of him. He has a cynical tone, saying that, "The nation must be taught to bear losses" and that they cannot win "without the sacrifice of men's lives". It seems as if Haig is trying to defend himself, as he says, "No amount of skill on the part of the higher commanders...will enable victories to be won without the sacrifice of men's lives." Although Source A does support the idea that Haig is sacrificing men's lives, and that he is bad for not caring about this, I think Haig may be just defending himself. He says that "no training, however good" and "no superiority of arms and ammunition" will stop people dying, so he is telling people so that he doesn't get blamed if it does happen. I think it also shows he must care a bit because he is warning the nation, and describing the deaths of soldiers as a "sacrifice". ...read more.

It is a cartoon and shows the troops practising for an attack. In some ways it does agree with the statement because it claims that the "General" was absent from an attack, which does imply that Haig did not care about his men enough to be there to instruct them. It also makes the "Major-General" seem stupid because in the cartoon he says there are "three major differences" between the practise and the real attack, and he only mentions two of these and forgets the second one. The cartoon is using humour. In some ways, the Source E disagrees with the statement. As the soldiers in the source are practising, it shows they care enough to instruct and practise and that they are taking the battle seriously by preparing for it. The source was published in a British magazine in 1917, and the purpose of the cartoon was to entertain people so it could be criticising Haig for humour to make people laugh, and this means we can't fully trust the source. The source shows Haig did care about the men, but also shows his faults. Some of the Sources disagree with the statement, one of them being Source B. Source B was written by Haig, in a report, and it mainly disagrees with the statement, especially in the first half. ...read more.

He had his own memories from the war, and as it was a significant event it is likely that he remembered a lot from it. Also, as he fought in both the World Wars he would have had another experience to compare it with, and therefore this source is reliable. The source doesn't tell us what it was written for, so the purpose of the source is unknown, but as the general is giving his opinion it is unlikely that it has been influenced by anyone for the purpose of writing the source. Some of the sources do agree with the statement, but others disagree. A lot of the sources do criticise Haig and his actions and do imply that he did not care about his men, but I have found that often these sources are not very reliable or have been written with a purpose to criticise Haig, as this was the attitude of people at the time, so many of the sources would agree with the statement to support peoples' views. The sources that disagree with the statement are more reliable than the ones that agree, so although a lot of sources are negative about Haig, I think this is just a reflection of the attitudes at the time. I think the sources agree with the statement to a certain extent. ?? ?? ?? ?? Rachel Everingham 11R History GCSE Coursework ...read more.