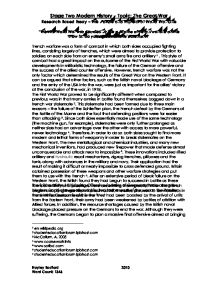 The First World War was decided by the outcome of trench warfare on the Western Front.

"The First World War was decided by the outcome of trench warfare on the Western Front." How far do you agree with this statement? Trench warfare was a form of combat in which both sides occupied fighting lines, consisting largely of trenches, which were aimed to provide protection to soldiers on each side from an enemy's small arms fire and artillery 1 . This style of combat had a great impact on the outcome of the First World War with valuable developments in militaristic technology, the failure of the German offensive and the success of the allied counter offensive. However, trench warfare was not the only factor which determined the results of the Great War on the Western Front. It can be argued that other factors, such as the British naval blockage of Germany and the entry of the USA into the war, were just as important for the allies' victory at the conclusion of the war, in 1918. The First World War proved to be significantly different when compared to previous wars in that many armies in battle found themselves bogged down in a trench war stalemate 2. This stalemate had been formed due to three main reasons - the failure of the Schlieffen plan, the French defeat by the Germans at the Battle of the Marne and the fact that defending positions were far easier than attacking 3. ...read more.

A major victory was won on September 29, when the Hindenburg Line was broken. This meant that the Allied advance could continue north, and by October 15, the Allies were near the Belgian border, threatening to cut the German lines in two. German troops were forced to withdraw from their positions along the coast, and the Allies captured the Channel ports that belonged to the Germans. The German front near the Schelde River was broken through by the British on October 17. With their supply lines cut, it became impossible for the Germans to hold their positions. The entire Western Front was on the verge of collapse and German leaders now asked for an immediate armistice12. Along with modern technology, these events contributed to the outcome of the First World War on the Western front. Although modern technology, the failure of the German offensive and the success of the allied counter offensive had great impact in deciding the outcome of the First World War, the allied naval blockade of Germany had perhaps just as much of an importance. As soon as war was declared in August 1914 the allied navies prevented ships transporting resources from sailing directly to Germany. ...read more.