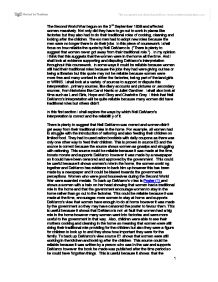 There is plenty to suggest that women never got away from their traditional role. Neil DeMarco, The Second World War, Hodder &amp; Stoughton, 2004. In your opinion are the views expressed by Neil DeMarco justified?

The Second World War begun on the 3rd September 1939 and affected women massively. Not only did they have to go out to work in places like factories but they also had to do their traditional roles of cooking, cleaning and looking after the children. The women had to adopt new roles because the men were no longer there to do their jobs. In this piece of coursework I shall focus on how reliable the quote by Neil DeMarco is ("There is plenty to suggest that women never got away from their traditional role."). In my opinion I think that this suggests that the women were in the home all the time. And I shall look at evidence supporting and disputing DeMarco's interpretation throughout this coursework. In some ways it could be reliable because women still had their traditional roles because the jobs they had were giving out tea or being a librarian but this quote may not be reliable because women were more free and many worked in either the factories, being part of the land girls or WRNS. I shall look at a variety of sources to support or dispute this interpretation , primary sources, like diary accounts and pictures or ,secondary sources, from historians like Carol Harris or Juliet Gardiner. I shall also look at films such as Land Girls, Hope and Glory and Charlotte Grey. I think that Neil DeMarco's interpretation will be quite reliable because many women did have traditional roles but others didn't. In this first section I shall explore the ways by which Neil DeMarco's interpretation is correct and the reliability of it. There is plenty to suggest that Neil DeMarco was correct and women didn't get away from their traditional roles in the home. For example, all women had to struggle with the introduction of rationing and also feeding their children on limited food. They had to used ration booklets with daily coupons as there was only one other way to feed their children. ...read more.

But the role of nursing was very important in the armed forces because they helped injured soldiers which is like the caring people that women are. If nurses weren't there then the men wouldn't have as much a reason to fight as it would bring six people out of the war effort instead of just one nurse to one injured man. One form of nursing was from the 'Army Nursing Corps', it was voluntary but was fully part of the army's nursing sector. A poster(2) shows a women looking very glamorous and showing that women should volunteer so this shows that Neil DeMarco's interpretation is correct in that they need to care for injured men. This source is reliable because the woman looks glamorous and womanly even in the army and shows DeMarco is correct but this was made by the government so it could have been censored. This could be useful because it was made at the time and encourages women to join into a very traditional role and therefore the attitude had not changed towards women however it was made by the government so it is biased and probably censored. However, there are other sources that suggest that Neil DeMarco was incorrect and in this next section I shall be looking at the ways that Neil DeMarco is incorrect in his interpretation. There is plenty of evidence to suggest that Neil DeMarco was incorrect and that women got away from their traditional roles in the workforce. Women who went into the workforce were in the factories as they needed to go into them because there were no men anymore to do their jobs. Source F3 shows that women needed to come into the war effort to bring out planes and encourages women to go into work. However, it is a poster to boost morale which could have been censored and also we don't know whether the women actually were going into the factories. ...read more.

This could be useful because it shows women away from their traditional roles and providing for the country however this is a film so it is not as useful to me. This is moderately useful. At home the sexual morals changed and 1 in 3 babies were born illegitimate. The divorce rate rose because of these new sexual morals. The mothers went into work because they needed to help the war effort even though women who had children weren't supposed to work. There was also a lot of dying in the war and more women had died at home than the soldiers in action. So, this shows that women were more respected, they were the defenders of the family and they had more rights to do what they wanted. To conclude, I think that in some ways Neil DeMarco is correct because some women had to go into the factories and were paid less than men, some women still agreed with the old sexual morals. Many women still had important roles at home, cooking, cleaning and providing a good home for children. However, I think that in other ways DeMarco is incorrect because women had non-traditional roles being part of the SOE, the Land Girls and other parts of the armed forces. I think that the roles of the SOE are shown well in the film Charlotte Gray and shows how life affected young women and also it is backed up because it actually happened to Violette Szabo (F10). So, I think that really Juliet Gardiner's interpretation is more reliable to Neil DeMarco's interpretation and the interpretations that were shown at the time because it shows the full picture of all of the women's roles in the Second World War and is a good conclusion because she wrote a whole book about women in the Second World War and is an academic book with a lot of references involved and that as a historian in this era she has more sources and has a benefit. ...read more.