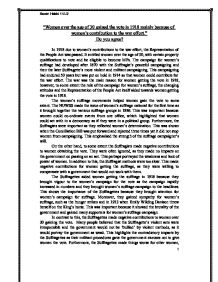 Women over the age of 30 gained the vote in 1918 mainly because of womens contribution to the war effort. Do you agree?

"Women over the age of 30 gained the vote in 1918 mainly because of women's contribution to the war effort." Do you agree? In 1918 due to women's contributions to the war effort, the Representation of the People Act was passed. It entitled women over the age of 30, with certain property qualifications to vote and be eligible to become MPs. The campaign for women's suffrage had developed after 1870 with the Suffragist's peaceful campaigning and then the later Suffragette's more violent and militant campaigning. This campaigning had endured 50 years but was put on hold in 1914 so that women could contribute for the war effort. The war was the main reason for women getting the vote in 1918, however, to some extent the role of the campaign for women's suffrage, the changing attitudes and the Representation of the People Act itself aided towards women getting the vote in 1918. The women's suffrage movements helped women gain the vote to some extent. The NUWSS made the issue of women's suffrage national for the first time as it brought together the various suffrage groups in 1886. ...read more.

Furthermore, another important reason why women's contributions to the war effort was very important for giving women the vote in 1918 was that the jobs women did were dangerous men jobs. By the end of the war, 1.5 million women worked in munition factories. This work lasted long hours and put women under physical and mental pressure. Exposure to dangerous chemicals such as phosphorus turned many of the workers skin yellow, resulting in the nickname of 'canaries'. In 1916, 191 case of toxic poisoning was reported with 52 being fatal. The fact that women s readily undertook these crucial, but highly dangerous occupations demonstrated that they were just as concerned about the nation's well being as their male counterparts fighting at the frontlines. This no doubt compelled the government to reconsider the extent of the political inequality they maintained between men and women. On the other hand, women's contributions to the war effort may not have been the most important reason as the vast majority of women who contributed to the war effort would still not be able to vote after 1918. ...read more.