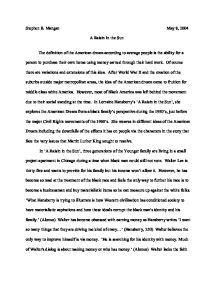 A Raisin In the Sun.

Stephen B. Mangan May 8, 2004 A Raisin In the Sun The definition of the American dream according to average people is the ability for a person to purchase their own home using money earned through their hard work. Of course there are variations and extensions of this idea. After World War II and the creation of the suburbs outside major metropolitan areas, the idea of the American dream came to fruition for middle class white America. However, most of Black America was left behind the movement due to their social standing at the time. In Lorraine Hansberry's 'A Raisin in the Sun', she explores the American Dream from a black family's perspective during the 1950's, just before the major Civil Rights movements of the 1960's. She weaves in different ideas of the American Dream including the downfalls of the effects it has on people via the characters in the story that face the very issues that Martin Luther King sought to resolve. In 'A Raisin in the Sun', three generations of the Younger family are living in a small project apartment in Chicago during a time when black men could still not vote. ...read more.

Let us not wallow in the valley of despair.' (King, 298) Walter's sister Beneatha has her own ideas about the American Dream. She shares the same apartment with Walter's family and their mother. She is currently attending college, which is something Walter didn't do. She has dreams of becoming a doctor and helping people and that is how she views the American dream. However, her treatment of her brother Walter after he loses her college money portrays that she too has some materialistic views that have swayed her judgment. When speaking with her mother, Beneatha says 'Love him, there is nothing left to love.' (Hansberry, 289) To which her mother replies 'There is always something left to love. And if you ain't learned that, you ain't learned nothing...Make sure you done taken into account what hills and valleys he come through before he got to wherever he is.' (Hansberry, 289) Mama is stressing the importance of not only family, but also loving one another and having compassion. Martin Luther King states 'Let us not seek to satisfy our need for freedom by drinking from the cup of bitterness and hatred.' ...read more.

Mr. Lindor's idea of the American Dream is to own a piece of property and not have black people around as they would spoil it. Mama's children politely tell him that they are moving in. Their action reveals a lot about their character as to how they were brought up by their parents. To not be intimidated by anyone. The theme of only wanting certain kinds of people in your neighborhood is still prevalent in today's society. Martin Luther King notes 'I have a dream that my four little children will one day live in a nation where they will not be judged by the color of their skin but by the content of their character.' (King, 299) The Younger's believe in racial harmony and living and working together. 'A Raisin in the Sun' is a true American classic in that it deeply explores the ideas behind the American Dream as seen from a black family. After reading it, you can see how the dreams and circumstances of the Younger family not only befit the black race, but also all classes and races of Americans. To want only money builds no moral character. To show no compassion leaves an empty soul and to believe that you can separate yourself from the 'bad people' is true ignorance. ...read more.