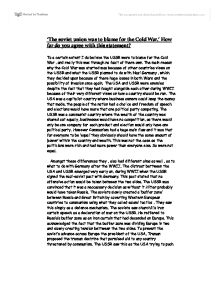 The soviet union was to blame for the Cold War.

'The soviet union was to blame for the Cold War.' How far do you agree with this statement? To a certain extent I do believe the USSR were to blame for the Cold War , and really this was through no fault of there own. The main reason why the Cold War was started was because of other countries views on the USSR and what the USSR planned to do with Nazi Germany , which they decided upon because of there huge losses in both Wars and the possibility of invasion once again. The USA and USSR were enemies despite the fact that they had fought alongside each other during WWII because of their very different views on how a country should be run. The USA was a capitalist country where business owners could keep the money that made, the people of the nation had a choice and freedom of speech and elections would have more that one political party competing. ...read more.

The soviets slowly created a 'buffer zone' between Russia and Great Britain by coverting Western European countries to communism using what they called salami tactics . They saw this simply as a defence mechanism. The soviets saw churchill's iron curtain speech as a decleration of war on the USSR. He reffered to Russia's buffer zone as an iron curtain that had decended on Europe. This acknowledged the fact that the buffer zone was dividing Europe in two and slowly creating tension bettween the two sides. To prevent the soviet's advance across Europe the president of the USA, Truman proposed the truman doctrine that pormised aid to any country threatened by communism. The USSR saw this as the USA trying to puch back the frontiers of communism. The Truman doctrine led to the distribution of aid to western Europe. This was called Marshall aid. The USSR saw this as the USA giving money to Europe but selfishly helping their own economy by administrating American goods. ...read more.

While the USSR saw the 'Iron Curtain Speech' as a declaration of war, the USA saw it as a statement of fact. The Truman doctrine was seen as containment (stopping the expansion of the soviet control over Eastern Europe). Marshal aid was simply a way of stopping communism spreading towards the west and the Berlin blockade was an attempt by Stalin to conquer East Berlin. In conclusion I do not think that Soviet Russia were entirely to blame for the cold war as there is always two sides to every story and without them there can be no argument or war. I feel that the USA's actions were simply to harsh and they abused the power that they had. Also , by keeping the 'atom bomb' a secret and then using it against Japan , without telling Russia that they even had the technology was a big contributor to the start of the Cold War By Shadi Paterson ...read more.