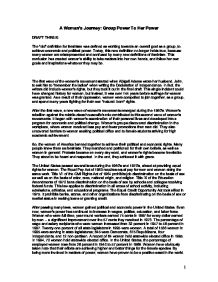 A Woman's Journey: Group Power To Her Power DRAFT THESIS: The "old" definition for feminism was defined as working towards an overall goal as a group, to achieve economic and political power. Today, this new definition no longer holds true, because many women are misrepresented and confused by many new definitions of feminism. This confusion has created women's ability to take matters into her own hands, and follow her own goals and inspirations-whatever they may be. The first wave of the women's movement started when Abigail Adams wrote her husband, John, to ask him to "remember the ladies" when writing the Declaration of Independence. In fact, the writers did include women's rights, but they took it out in the final draft. This single incident could have changed history for women, but instead, it was over 144 years before suffrage for women was granted. As a result of their oppression, women were compelled to join together, as a group, and spend many years fighting for their own "natural- born" rights. After the first wave, a new wave of women's movements emerged during the 1960's. Women's rebellion against the middle-class housewife's role contributed to this second wave of women's movements. It began with women's examination of their personal lives and developed into a program for economic and political change. Women's groups discovered discrimination in the workplace, where women received less pay and fewer promotions than men did. ...read more.

In 1994, 72 women held statewide elected office. In the United States, the percentage of employed women rose from 28 percent in 1940 to 57 percent in 1989. Women have obviously taken note that their efforts are achieving higher and better things for the female species. By being more involved in matters of power, women have proven to be a positive asset in the world. This has given them respect and pride to be a woman of any kind, whether a doctor, teacher, or mother. As they have grown, and continued to grow, women keep proving that it is not just "a man's world" anymore. Feminists achieved their goal of political and economic power as a group. But as time has gone by, we have reached the third wave, the radical one. Feminism, as one concept, has slowly diminished as women have received very diverse definitions for feminism and its goals. "We can't even agree on what a 'Feminist' is...Feminism in America has come to mean anything you like, honey. There are as many definitions of feminism as there are feminists, some of my sisters say, with a chuckle. I don't think it's funny," says Carmen Vasquez, Towards A Revolutionary Ethic. Neither should we. There doesn't seem to be much humor in the fact that feminism is a lost word. ...read more.

For example, Hunter Tylo, who was hired to play a vixen on a late-night soap opera, was canned in March of 1996 after telling producers she was pregnant. Tylo sued Spelling Entertainment Group and Spelling Television Inc., claiming breach of contract, wrongful termination, and pregnancy discrimination. Tylo was appalled that a woman had to choose between her family and a career. She wanted to prove to women that they should not fear losing one to the other. "All I wanted to hear (from the jury) was that pregnancy is not a bona fide occupational (dis)qualification," a delighted Tylo told reporters outside the Los Angeles Superior Court. "I wanted to hear that yes, indeed, I could, and can do the job,". Hunter Tylo took the initiative to receive justice for being treated unequal, because it was important to her. Hunter Tylo was not the only woman who was inspired by an event to achieve a goal on her own. Many women around the world believe more every day that they have the power to make their aspirations reality. Many women have been wary at first to take the first leap to do as they please. Day by day, they become inspired by their mothers, heroines, and often people in the public eye. As the world encourages women to be "all that they can be," feminism becomes something of the past. It disappears more as women realize their own potential. ...read more.