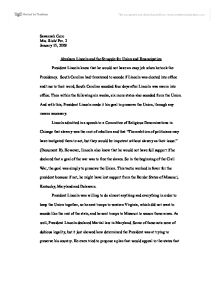 Savannah Gore Mrs. Rich/ Per. 2 January 15, 2009 Abraham Lincoln and the Struggle for Union and Emancipation President Lincoln knew that he would not have an easy job when he took the Presidency. South Carolina had threatened to secede if Lincoln was elected into office and true to their word; South Carolina seceded four days after Lincoln was sworn into office. Then within the following six weeks, six more states also seceded from the Union. And with this, President Lincoln made it his goal to preserve the Union, through any means necessary. Lincoln admitted in a speech to a Committee of Religious Denominations in Chicago that slavery was the root of rebellion and that "The ambition of politicians may have instigated them to act, but they would be impotent without slavery as their issue." (Document B). However, Lincoln also knew that he would not have full support if he declared that a goal of the war was to free the slaves. So in the beginning of the Civil War, the goal was simply to preserve the Union. ...read more.

President Lincoln also knew that declaring emancipation was a war strategy in that it would also weaken the rebels by drawing off their laborers (Document B). So on September 23, 1862, President Lincoln announced the Emancipation Proclamation, which freed the slaves in not-yet-conquered Southern territories, not slaves in the Border States or conquered territories, so as not to upset them and make them want to secede from the Union as well. Of course some disagreed with the Proclamation, especially immigrants, like the Irish, who felt that their jobs were being threatened, by African Americans that migrated North. The immigrants believed that they would lose their jobs to African Americans because factories would hire them at lower wages. And in his self-published pamphlet, Thomas Buckner explains how blacks were being mistreated in not just the South, but the North as well and he also reported on the anti- Negro riots in Detroit (Document F). Many men in the Army who did not want to fight for the freedom of slaves became deserters. However President Lincoln deeply felt that the Emancipation Proclamation did not just free the slaves but it would help preserve the Union too. ...read more.

The 54th Regiment was one noted for being an all black regiment put together by Fredrick Douglas. This regiment allowed African American men to enlist and earn up to $13 a month as well as provide state aid to their families (Document D). Prior to them being freed, blacks only held positions in the Army as cooks or stewards. Unfortunately, even though the North won the war and African Americans were free, they were still being denied many of their rights. Yes, Lincoln did succeed in preserving the Union, but equality of races was a slow process. Even after Reconstruction, the Jim Crowe era dominated in the South and kept African American down. Fortunately, Lincoln did more than just preserve the Union. In his Gettysburg Address, Lincoln stated that the Civil War was a test to see if our nation, built on the proposition that all men were created could long endure (Document C). And he proved it, and veterans and those killed fought to prove that a government of the people, by the people, for the people, shall not perish from the earth (Document C), but live on in a strong unified nation, filled with men of every color, but yet still all equal in the eyes of the law. ...read more.