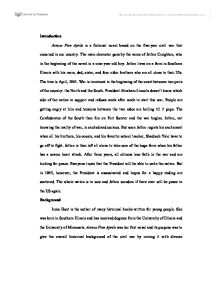 Introduction Across Five Aprils is a fictional novel based on the five-year civil war that occurred in our country. The main character goes by the name of Jethro Creighton, who in the beginning of the novel is a nine-year-old boy. Jethro lives on a farm in Southern Illinois with his mom, dad, sister, and four older brothers who are all close to their 20s. The time is April, 1861. War is imminent in the beginning of the novel between two parts of the country- the North and the South. President Abraham Lincoln doesn't know which side of the nation to support and refuses week after week to start this war. People are getting angry at him and tensions between the two sides are boiling till it pops. The Confederates of the South then fire on Fort Sumter and the war begins. Jethro, not knowing the reality of war, is excited and curious. But soon Jethro regrets his excitement when all his brothers, his cousin, and his favorite school teacher, Shadrach Yale have to go off to fight. ...read more.

The Southerners were wealthier than the Northerners, so this caused some tension, especially when Southern states withdrew from the Union. The abolitionists were angered over slavery when the South started to get wealthier and as they never cared about slavery before, they stayed angered and eventually the whole nation split in two and hatred began till burning point. And so the war started and hundreds of thousands of casualties resulted from this war. The overall theme of this novel is that war is not always as exciting and predictable as it seems. When Jethro first heard of the war, he viewed it as an adventurous opportunity compared to the boring farmers' life he was used to. He expected, like everyone else in Illinois at the time, for the war to be short and for the North to win. The author seems to favor the North seeing as how she made the main character, Jethro, side with the North and with the Union. Irene Hunt also seems to express her views, that war has its price and that peace is not always perfect (President is assassinated), with great details. ...read more.

This book taught me that Presidents really have a hard job in deciding and ruling over the country in war and playing the role of commander in chief. Recommendation Across Five Aprils is a novel that can appeal to any reader and I recommend this book to people of all ages. Not only is this book based on a historical event and therefore educational, but it also contains romance, loyalty, and compassion. While there is Jethro Creighton and his loyalty for his country, in this novel, there is also a hint of romance when his older sister, Jenny, loves and marries Jethro's favorite schoolmaster, Shadrach Yale. The novel's main characters are the Creighton family of Southern Illinois and they are all greatly affected during the violent years of the civil war. The protagonist, Jethro Creighton, is a little boy who is based on the family records and past experiences of the author, Irene Hunt and her family. This book greatly impressed me; from the moment I first saw that it was a Newbery Honor book. To find out what happens at the end of the novel to the Creightons and which side (north/south) is victorious in the war- READ THIS BOOK! ?? ?? ?? ?? ...read more.