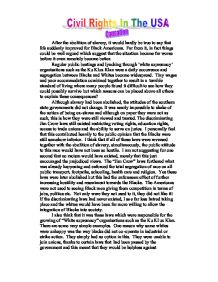 After the abolition of slavery, did life improve for Black Americans?

After the abolition of slavery, it would hardly be true to say that life suddenly improved for Black Americans. Far from it, in fact things could be well argued which suggest that the situation became far worse before it even remotely became better. Regular public beatings and lynching through 'white supremacy' organisations such as the Ku Klux Klan were a daily occurrence and segregation between Blacks and Whites became widespread. Tiny wages and poor accommodation combined together to result in a terrible standard of living where many people found it difficult to see how they could possibly survive but which reasons can be placed above all others to explain these consequences? Although slavery had been abolished, the attitudes of the southern state governments did not change. It was nearly impossible to shake of the notion of being ex-slaves and although on paper they were not as such, this is how they were still viewed and treated. ...read more.

I also think that it was these laws which were responsible for the growing of "White supremacy" organisations such as the Ku Klux Klan. There are some very simple examples. One reason why some whites were unhappy was the way blacks did not co-operate in industrial or strike action. They simply had no option in this. They were unable to join unions, thanks to certain laws that had been passed by the government and this meant that they would be helpless against punishment from employers. Thus, leaving them no choice but to refrain from strike action. This just served to enrage some whites further. The sudden change as far as voting rights were concerned did not help also. Suddenly, black politicians were popping up everywhere and this frightened their white counterparts. They now had some real opposition to deal with and this was not popular. They were seen as a threat, as were black businessmen who were also later targeted by "race hate" groups. ...read more.

Even further holding the Black Americans back was the sudden influx of European immigrants. This meant that on the rare occasion that vacancies had become available in reasonable jobs, they were usually given to the Europeans as even though they were not American, they were still white and thus they were given priority. In conclusion, I feel that the attitudes of the southern state governments was largely to blame for the poor quality of life for the blacks as it can be linked to misfortune in social, political and economic positions. Politically, through the lack of voting rights and being to serve on juries, economically through the ban on blacks carrying out most skilled jobs and socially through the racial hatred that had been stirred up by these laws. Yes, slave status and white supremacy organisation groups played a large part but these only came about and were enhanced by the laws passed. This is why I think that this is by far the most important reason, coupled with organisations such as the Ku Klux Klan which made life a knightmare for Black Americans during this period. By Amandeep Bindra 10J ...read more.