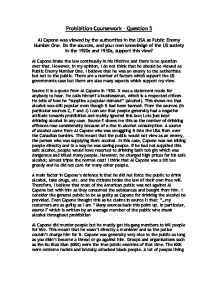 Al Capone was viewed by the authorities in the USA as Public Enemy Number One. Do the sources, and your own knowledge of the US society in the 1920s and 1930s, support this view?

Prohibition Coursework - Question 5 Al Capone was viewed by the authorities in the USA as Public Enemy Number One. Do the sources, and your own knowledge of the US society in the 1920s and 1930s, support this view? Al Capone broke the law continually in his lifetime and there is no question over that. However, in my opinion, I do not think that he should be viewed as Public Enemy Number One. I believe that he was an enemy to the authorities but not to the public. There are a number of factors which support the US governments case but there are also many aspects which support my view. Source H is a quote from Al Capone in 1930. It was a statement made for anybody to hear. He calls himself a businessman, which is a respected citizen. He tells of how he "supplies a popular demand" (alcohol). This shows me that alcohol was still popular even though it had been banned. From the sources (in particular sources C, F and J) I can see that people generally had a negative attitude towards prohibition and mainly ignored this law; Lots just kept drinking alcohol in any case. Source E shows me this as the number of drinking offences rose considerably because of a rise in alcohol consumption. ...read more.

The picture shows Al smiling and gives a positive attitude towards him; this would make the public feel less threatened by him. TIME was a respected magazine published and sold all across the USA; this built up Capone's reputation and got him known in America and also internationally. Al Capone then became quite dangerous because as he manipulated the media, they in turn, used propaganda and other techniques to influence the general public. Capone had so much control that people at the time were unaware of. Al Capone not only manipulated people but also blackmailed and bribed people so that he got his own way. These people could be the general public but more often, it was the police. He made sure that he covered up his dirty work and always had an alibi. He became friends with a man called Bill Thompson. Bill stood for mayor of Chicago and together, they rigged the election so that he won. This meant that Al Capone had an associate in a position of power; however, it was not a democratic decision and people felt very threatened. Al Capone owned a lot of businesses in Chicago. He owned all the brothels and casinos as well as many illegal saloons known as speakeasies. ...read more.

People turned to alcohol to drown their sorrows and alleviate there fairly miserable lives. As Capone was supplying the drinks people respected him rather than the uncaring authority. The government spent a lot of money trying to catch Capone, which could have been used on making the publics lives better. They used Al Capone as a scapegoat and attempted to blame many extra problems on him. I feel that the authorities were making him out to be worse than he really was and aiming to turn the public against him and against the alcohol. I also believe that, as other countries mocked America (Source C), the government blamed Capone even more as they needed somebody to accuse. In conclusion, I think that it was only the government officials and rival gangs who did not like Al Capone. The general public were either on his side (by buying alcohol, etc) or did not really think about Al Capone, as he was so far away, and so were not threatened by him or against him. Many people respected Capone and in a small way admired him for his bravery and ability to flout the law. Many lower class people wished that they could be him and have the money that he did. In actual fact, not many people of the public truly hated Capone. Therefore, I believe that Al Capone was not really Public Enemy Number One. ...read more.