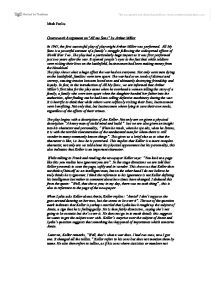 All My Sons Coursework

Coursework Assignment on "All my Sons" by Arthur Miller In 1947, the first successful play of playwright Arthur Miller was performed. All My Sons is a powerful account of a family's struggle following the widespread effects of World War Two. The play had a particularly huge impact as it was first performed just two years after the war. It opened people's eyes to the fact that while soldiers were risking their lives on the battlefield, businessmen had been making money from the bloodshed. The play shows what a huge effect the war had on everyone. Not only were men dying on the battlefield, families were torn apart. The war had sown seeds of distrust and secrecy, causing tension between loved ones and ultimately destroying friendship and loyalty. In fact, in the introduction of All My Sons, we are informed that Arthur Miller's first idea for the play came when he overhead a woman telling the story of a family, a family who were torn apart when the daughter handed her father into the authorities, after finding out he had been selling defective machinery during the war. It is horrific to think that while others were selflessly risking their lives, businessmen were benefiting. Not only that, but businessmen where lying to save their own necks, regardless of the effects of their crimes. The play begins with a description of Joe Keller. Not only are we given a physical description "A heavy man of stolid mind and build" but we are also given an insight into his character and personality, " When he reads, when he speaks, when he listens, it is with the terrible concentration of the uneducated man for whom there is still wonder in many commonly known things". This gives us a brief clue as to what the character is like, i.e. how he is perceived. This implies that Keller is a more complex character, not only are we told about his physical appearance but his personality, this also indicates that Keller is an important character. ...read more.

The scene is dramatic and suspenseful because the audience can tell from Keller's reaction that there is a secret but we do not know what it is and why Keller and Mother are worried, additionally the fact that Chris and Annie exit suggests a secret. At this point, Mother is scared and questions Keller continuously about George's appearance. At first Keller acts normally saying "What do I care what Steve's got to tell him?" Although, once Mother starts warning Keller, the tension rises again. We see this because Mother sits stiffly in her chair and we are told that Keller replies desperately, trying to convince Mother but also trying to convince himself. At the end of the scene and the act Keller leaves in "hopeless fury" violently slamming the door. This ends Act one. In Act One Keller is presented as a character with two sides. When he is in public he puts up a fa�ade, pretending to be someone else, the friendly and successful businessman and neighbour. On the other hand, when he is with Mother the tension of whatever Keller is hiding builds up and they end up arguing. Keller is wholly dependent on Mother, ignoring her needs and taking her advice but never heeding her warnings. When Keller is alone with Mother we see his true colours, he is hostile and aggressive. In public Keller is distant, steering conversations away from topics he does not like and avoiding confrontation always covering up. Nevertheless, every so often we see an example of Keller's violent side. Arthur Miller gives us clues to Keller's character through the differences between the ways he acts around Mother which is a complete contrast to the way he acts in public. We can also build an idea of Keller's characters by what he says, and then what he really means, the hidden meanings; the way he avoids topics and changes the subjects, also, the way he pretends and uses people like Bert to keep up his pretence. ...read more.

Also, Keller's live is steeped in lies as are his relationships, especially his relationship with Kate. Keller's relationship with Kate is teetering on the edge of a cliff, they act very tense together and normally ending in a fight and example of this is at the end of Act One, Keller exits slamming the door. The lies begin to weave a web of deceit, growing all the time, until in the end Keller is lying to himself. In complete contrast to Keller is his son, Chris. Chris fought during the war and was touched by the love the men had for each other, we see this in Act One: "they killed themselves for each other". Chris is a very idealistic person, in Act Two Sue says to Annie "Chris makes people want to be better than it's possible to be. He does that to people". From this we can see that Chris believes in more than material items. Chris refers to Keller's beloved business as "that rat - race again", this shows that Chris is not inspired by the business and perhaps feels contempt towards it. Another character trait of Chris is he is honest, and at the beginning of Act Three, Jim suggests to Kate that Chris has gone to watch his "star of honesty" go out. Chris is shocked when his Father's secrets are uncovered, he defended his Father from George and now his Father is guilty. Chris looked up to his Father and now he feels lost and let down. From this play there are many lessons to learn especially from the key themes, one lesson we can learn is to always be conscious of other people around us and how our actions might affect them. Also, from the play we can see how a lie, even just a small lie can spiral out of control, leaving a path of both pain and destruction behind it. All we can do is sit and watch as it tears the Keller's lives apart ?? ?? ?? ?? Mark Feeliu ...read more.