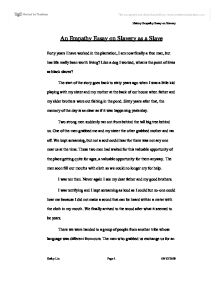 Am I not a Man and a brother?

An Empathy Essay on Slavery as a Slave Forty years I have worked in the plantation, I am now finally a free man, but has life really been worth living? Like a dog I worked, what is the point of lives as black slaves? The start of the story goes back to sixty years ago when I was a little kid playing with my sister and my mother at the back of our house when father and my elder brothers were out fishing in the pond. Sixty years after that, the memory of the day is as clear as if it was happening yesterday. Two strong men suddenly ran out from behind the tall big tree behind us. One of the men grabbed me and my sister the other grabbed mother and ran off. We kept screaming, but not a soul could hear for there was not any one near us at the time. These two men had waited for this valuable opportunity of the place getting quite for ages, a valuable opportunity for them anyway. The men soon fill our mouths with cloth so we could no longer cry for help. I was ten then. Never again I see my dear father and my good brothers. I was terrifying and I kept screaming as loud as I could but no-one could hear me because I did not make a sound that can be heard within a meter with the cloth in my mouth. We finally arrived to the wood after what it seemed to be years. There we were handed to a group of people from another tribe whose language was different from ours. The men who grabbed us exchange us for an ox with the group of people. Are all three of our lives worth less than one single beast? There we met some other women, children but only a few men. ...read more.

Never a slave would have retired unless we have brought our freedom or free by our master for any other reasons. When we start to warn out, we would be put back into the third and work our way down and finally back to the first gang until our death. Some very old dying female slaves who were not even capable of jobs of first gangers were made to look after the babies of slaves whom work in the field. I think that is the best we could ever hope for if we were never free in our entire life - at least for the last years of your life, you do not have to do hard works in the field and most of all, your laughing innocent baby descendants would bring you joy; but who would not feel the grief knowing they would work like dogs soon? Despite our heavy work in the sugar fields, 60% of us are women and girls. We are all controlled by an overseer who is always a male. I was surprise by the colour of the overseer on my first arrival to the field - black - like most of us; but no mercy he had shown to us. His whipping is serve and heavy, and yet, to a fellow black slave who are going through the same situation he had been through. Rose, my fellow slave told me that the overseer was a promoted slave, she did not say much more after that for fear she would offended him and would be whipped if she say too much and her words come to the overseer's ears. The overseer did not want to be demoted again so he whipped us often and his whip is of the harshest and always cut into our bones for the slightest fault. I would much rather be demoted than do such an inhumane thing to my fellows, but who knows? ...read more.

We met many white abolitions who strongly against slavery, they really changed my view towards the white folks, some of them are nice people as well. They are the ones who fought freedom for many of us for many years. These white men took a big part in abolishing slavery and making slavery illeagal,with them, there are some former black slaves. We are all indvaul and shoud not jude the man as a bad man just because he is white and they should not see us as ideal slaves they could use just because we are black. Our family had lived a good life with the surname 'Smith', my master's, my sister used her master's, 'Brown'. All my will have come true but to free every single slave on earth, this is why I am writhing this to tell everyone on earth the lives of slaves and beg the masters to give mercies to their slaves, free them as well as telling the slaves to fright the freedom for themselves. I no longer have to worry about my children's lives at risk of being whipped to death, I can now see them do what they want to do, they are now free and healthy and have everything I want them to have. This weak, feeble old woman who had lived a long life considering I was once a slave who had expected to live for twenty had live until tody. But the time that have to come have to come. I shall rest in pace in my lovely children and grandchildren and husband, and sister, and nephew, and children-in-law... s' warm, loving pace. I shall die without worries to see my dear mother again... Sources Websites: http://www.20000-names.com/female_african_names.htm http://www.gwu.edu/~medusa/reproductive.html# http://www.spartacus.schoolnet.co.uk/USASoverseers.htm http://en.wikipedia.org/wiki/Slavery_Abolition_Act_1833 http://caho-test.cc.columbia.edu/dbq/11022.html#D Books: Slave Girl by Patricia C McKissack ISBN 0 439 98186 7, 978 0439 98186 6 Slaves & Slavery by Duncan Clarke ISBN 1 840 13167 5 History Empathy Essay on Slavery Kathy Liu Page 1 08/12/2008 ...read more.