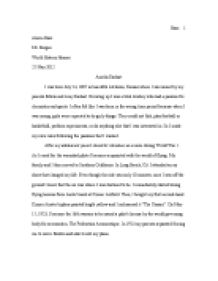 ﻿Bass 1 Alexia Bass Mr. Bergen World History Honors 25 May 2012 Amelia Earhart I was born July 24, 1897 in beautiful Atchison, Kansas where I was raised by my parents Edwin and Amy Earhart. Growing up I was a total tomboy who had a passion for chemistry and sports. I often felt like I was born in the wrong time period because when I was young, girls were expected to do girly things. They could not fish, play football or basketball, perform experiments, or do anything else that I was interested in. So I made my own rules following the passions that I wanted. After my adolescent years I stared to volunteer as a nurse during World War 1. ...read more.

On June 17, 1928, I took off from Trespassey Harbor, Newfoundland. Accompanying me on the flight was pilot Wilmer Stultz and co-pilot/mechanic Louis E. Gordon. Twenty hours and 40 minutes later we landed in Burry Point, Wales. It was that day that I became infamous. Although the journey was a success I felt like baggage on the plane ride because I did not get to participate at all in the flying. Despite my fame I was not the best woman aviator of my day. I have had many crashes and frequently in the air I endure unbearable upset stomachs from the gasoline fumes. Nevertheless, I was getting more well known by the day, and it was only a matter of time before I needed to make another big trip. ...read more.

Seventy-nine days and $30,000 dollars later I left Miami on June 1 to try again. I was three-fourths of the way done before I got so sick and needed to land in New Guinea to regain strength. On July 2, 1937 I left Lea, New Guinea to finish my journey Bass 3 but as proceeded the clouds got thicker and, though I did not know it at the time, I was more then five miles off of my target island. I had been ill informed of how to work the radio and I did not know Morse code. The fuel was getting low and in every direction all I could see was the glistening blue ocean. Numerous times I attempted to radio for help however I never received a response. I just kept flying until my plane slowly fell into the waves of the deep blue sea. I was forever lost. ...read more.