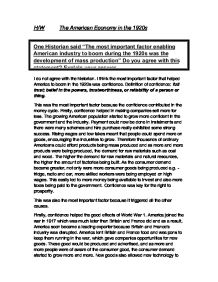 H/W The American Economy in the 1920s I do not agree with the historian. I think the most important factor that helped America to boom in the 1920s was confidence. Definition of confidence: full trust; belief in the powers, trustworthiness, or reliability of a person or thing. This was the most important factor because the confidence contributed in the money cycle. Firstly, confidence helped in making companies sell more for less. The growing American population started to grow more confident in the government and the industry. Payment could now be done in instalments and there were many schemes and hire purchase really exhibited some strong success. Rising wages and low takes meant that people could spend more on goods, encouraging the industries to grow. Therefore thousands of ordinary Americans could afford products being mass produced and as more and more products were being produced, the demand for raw materials such as coal and wood. ...read more.

America lent Britain and France food and weapons to keep them running in the war, which gave companies opportunities for new goods. These good would be produced and advertised, and as more and more people were of aware of the consumer good, the consumer demand started to grow more and more. New goods also allowed new technology to be developed, leading to new companies, investments, mass production and confidence which were a contribute factor for the economy in growing although all factors played a vital part to make the American economy grow almost every second. Secondly, confidence led to new government policies being introduced or improved. Confidence was crucial because more and more methods were being tried out to cancel out any foreign competition. The laissez-faire approach meant that people were free to do what they want and the government wouldn't interfere so this was a pure example of capitalism in action. ...read more.

The Ford Motor Car Company exhibited some brilliant new methods the biggest being the production/assembly line. This meant that there was 1 Model T being produced every 10 seconds. Such mass production meant that in America, 1 in 5 owned a car whereas in Britain, 1 in 43 did and in Russia, 1 in 7000 owned one. In 1900, there were only a measly 4000 cars being produced but in 1929, this rose to 4.8 million. The Ford Motor Car meant that other companies were encouraged because of the raw materials used and the cars used a massive amount in raw materials and natural resources such as iron and steel which were extremely important in the motoring industry. Altogether this really proved that the American industry was incredibly strong. The boom of the 1920s is one part of America's history that we just have to remember even now. It led and showed the World in how the Economy of a country could boom in a short amount of time. ...read more.