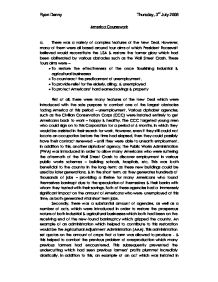 America Coursework a. There was a variety of complex features of the New Deal. However, many of them were all based around four aims of which President Roosevelt believed would reconstitute the USA & restore the former glory which had been obliterated by various obstacles such as the Wall Street Crash. These fours aims were - * To restore the effectiveness of the once flourishing industrial & agricultural businesses * To counteract the predicament of unemployment. * To provide relief for the elderly, ailing, & unemployed * To protect Americans' hard earned savings & property First of all, there were many features of the New Deal which were introduced with the sole purpose to combat one of the largest obstacles facing America at this period - unemployment. Various alphabet agencies, such as the Civilian Conservation Corps (CCC) were instated entirely to get Americans back to work - happy & healthy. The CCC targeted young men who could sign on to this Corporation for a period of 6 months, in which they would be assisted in their search for work. However, even if they still could not locate an occupation before the time had elapsed, then they could possibly have their contract renewed - until they were able to unearth employment. In addition to this, another alphabet agency, the Public Works Administration (PWA) was introduced in order to allow many Americans who were suffering the aftermath of the Wall Street Crash to discover employment in various public works schemes - building schools, hospitals, etc. This was both beneficial to the country in the long-term; as these new buildings could be used by later generations, & in the short term, as they generates hundreds of thousands of jobs - providing a lifeline for many Americans who found themselves bankrupt due to the speculation of themselves & their banks with whom they trusted with their savings. ...read more.

* In 1931, another 2294 banks went bankrupt - the numbers of failing banks were becoming larger & larger each year. * In the decade before the Wall Street Crash had even occurred, around 500 banks failed each year, however these were mainly miniature banks who merely lent too much. Also, the boom increased the sale of consumer goods, however, most of the upper & middle class citizens who could actually afford these goods already had them - resulting in a lack of business for America's seemingly flourishing industry. Even the most thriving companies were staring to decline, & yet the government still refused to intervene. Furthermore, the surplus goods which weren't affordable enough for the lower classes could not be exported to Europe - they were still experiencing the aftermath of the war, & had mimicked America by introducing tariffs of their own in order to protect their own businesses. In 1929, efforts were made to combat these problems - $3billion was spent on advertising industry. However, this could have been spent on a variety of more meaningful things - such as methods of decreasing unemployment, charitable organisations, etc. However, as America was a self help state, in which the government did not assist in the solving of any problems, they adopted a, 'You got yourself into this mess, you get yourselves out' policy (Laissez Faire), & so they believed that this would go against their policies & refused to spend money on these various methods of assistance. Another reason would be the fact that there was a colossal amount of Americans who were unemployed - a knock on effect from the collapse of the farming industry, as many of the workers on the farms & the farmers themselves escaped to the city in false hope that they would find employment - somewhere. However, due to the lack of proper accommodation, many slum towns were formed. ...read more.

For there to be organisations on a scale such as this, which virtually restructured the United States, and for them to remain free of corruption is an example of an unarguable success regarding the New Deal? On the other hand, despite organisations such as this showing immense dedication to the cause of revitalising the confidence of the everyday American Citizen in government, the confidence which had been present in the 'Boom' years of the 20's was never again witnessed in the United States, throughout the 1930's, investment in the stock market was only around 75% of that which had previously been speculated/invested. The untouchable highs which were witnessed in the 1920's were not relived due to the terms of the New Deal and so it was somewhat unsuccessful in it's' attempt the restore the astonishing affluence which had previously been so common. In addition to this, despite the fact that the New Deal strived in its efforts to conquer the significant dilemma of unemployment, there were still 6, 000, 000 American citizens who remained unemployed. This predicament was only overcome because of America's involvement in another war - many Americans could subsequently locate employment in munitions factories and other, military related occupations. However, this became an even larger problem than the threat of unemployment first posed, as it was the First World War which was the prequel to the crises which were present during the 1920's, and the 1930's. In conclusion, I do believe that some aspects of the New Deal could be regarded as quite a significant success - such as women finally achieving prominent position in government, such as Mary Macleod Bethune, a black woman who was in charge of the National Youth Administration. However, it goes without saying that nothing could ever be a complete success - and the New Deal further proves this as it failed to tackle problems such the discrimination against black Americans with any great conviction or effectiveness. ?? ?? ?? ?? Ryan Denny Thursday, 3rd July 2008 ...read more.