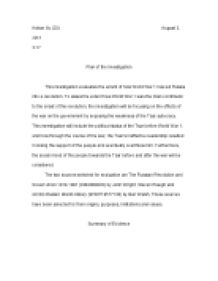 ﻿Adrian Sy (20) August 3, 2011 3.17 Plan of the Investigation This investigation evaluates the extent of how World War 1 has led Russia into a revolution. To asses the extent how World War 1 was the main contributor to the onset of the revolution, the investigation will be focusing on the effects of the war on the government by exposing the weakness of the Tsar autocracy. This investigation will include the political status of the Tsar before World War 1, and how through the course of the war, the Tsar?s ineffective leadership resulted in losing the support of the people and eventually overthrew him. Furthermore, the social mood of the people towards the Tsar before and after the war will be considered. The two sources selected for evaluation are The Russian Revolution and Soviet Union 1910-1991 (0340889020) by John Wright, Steven Waugh and GCSE Modern World History (9780719577130) by Ben Walsh. These sources have been selected for their origins, purposes, limitations and values. Summary of Evidence When Nicholas II was crowned Tsar of Russia in 1894, the crowds flocked to St. Petersburg to cheer. After twenty-three years, the new Tsar whom they had called ?the Little Father of Russia? was removed from power and was held prisoners. ...read more.

This book has helped me understand the several factors that are involved in the revolution. It has also given me several insights on the extent of the effects of World War 1 on Russia. However, this book is limited in the sense that the explanations are not being substantiated enough as it does not have enough details about how the war affect Russia. This book was only able to give me several ideas on what actually took place. This book is very reliable; it has several quotes from primary sources from letters between the Tsar and his people. Furthermore, a GCSE assistant examiner wrote this book. Secondly, ?The Russian Revolution and Soviet Union 1910-1991? by Steve Waugh and John Wright provides a very clear account of what were the causes of the Russian Revolution. The book?s purpose is to substantiate the ideas developed from the previous book with detailed explanations, such as the political effects from the war. The book is easy to understand; hence it creates a vivid image of the events during the World War. However the limitations to this is that it does not provide more information on the background of the Tsar government, and the ones provided are difficult to link with each other. ...read more.

Furthermore, Russia experienced its coldest winter at the height of the food crisis; this did not help the mood of the people towards the Tsar. By the end of 1916, Russia was on the verge of defeat, and everyone blamed the Tsar for what happened. In contrast to before the war, where they celebrated the Tsar?s 300th rule, now they were discontent and cursing at the Tsar. Conclusion In conclusion, the Russian Revolution occurred due to the Tsar?s incompetence in leading his government and eventually his army. Although the people were undergoing severe hardships such as terrible working conditions and the unequal distribution of land, it was due to the Tsar?s weakness in controlling the country in the most important time that caused the Russian Revolution. It can be noted that without the role of World War 1, the people would not have opened their eyes and realize that their Tsar was truly incapable of leading them. The continuous oppression of the people made them want change, the Tsar was able to satisfy the people for a short while, however the same problem would resurface due to the Tsar?s inability to lead. The stage was ready for change with discontent among the people rising, all it needed was a catalyst that everyone could connect to and bring about change, hence there was a Russian Revolution. ...read more.