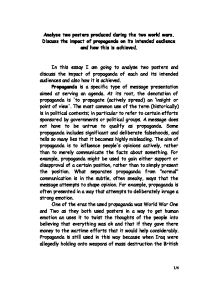 Analyse two posters produced during the two world wars. Discuss the impact of propaganda on its intended audience and how this is achieved.

Analyse two posters produced during the two world wars. Discuss the impact of propaganda on its intended audience and how this is achieved. In this essay I am going to analyse two posters and discuss the impact of propaganda of each and its intended audiences and also how it is achieved. Propaganda is a specific type of message presentation aimed at serving an agenda. At its root, the denotation of propaganda is 'to propagate (actively spread) an 'insight or point of view'. The most common use of the term (historically) is in political contexts; in particular to refer to certain efforts sponsored by governments or political groups. A message does not have to be untrue to qualify as propaganda. Some propaganda includes significant and deliberate falsehoods, and tells so many lies that it becomes highly misleading. The aim of propaganda is to influence people's opinions actively, rather than to merely communicate the facts about something. For example, propaganda might be used to gain either support or disapproval of a certain position, rather than to simply present the position. What separates propaganda from "normal" communication is in the subtle, often sneaky, ways that the message attempts to shape opinion. For example, propaganda is often presented in a way that attempts to deliberately inrage a strong emotion. ...read more.

It also gives out a positive attitude towards war, another thing that puts the British side in a brighter light is the fact that the main character in the poster is holding three Nazi Germans helmet this implies that it takes only one British soldier to kill three Nazis. As the soldier is standing there you can see that he has a bandage over his one eye and arm this makes people think that it has been a hard war and we have still won. The soldier is also still holding his gun over his shoulder signifying that he is strong because he is not straining with the heavy gun and also he still has the power to kill anyone who tries to hurt Britain. As the camera angle is low it makes the soldier look very superior on his hill. Also the sunlight on his side makes you think that god is on his side. I think this poster is very good at persuading you to think what it wants you to think instead of what is really happening with the specific subject. In the second poster there are many similarities connecting the second to the first. One of these is the main focus point, which is a human but differing from the first this person looks intimidated you cant ...read more.

The font in this poster and the other is bold so it is easily read and also eye-catching. Another similarity between the posters is the colour there is red in both as in the first one they wanted to show victory and in the second they want to show danger. The sack on the person's head makes you think that he has had his humanity taken away and they are doing this to a British person they are doing it o Britain and just when you think that the Germans couldn't be any more evil you see the date at the bottom of the telegram which makes the whole killing even more realistic and dramatic. In conclusion I think that both poster hold very similar propagandistic techniques and because of this they both result in apiece of propaganda. I think if I was a British woman in the era of the World War One and Two I would have been very effected by the two posters in very different ways. I think that the people who saw these posters would of reacted as if it was a family member in the poster and would have been drawn to the poster in this way. I don't think that the government would of wanted this to be the reaction of the British people and would have done anything in their will to stop propaganda getting around the country in this era. 1/4 ...read more.