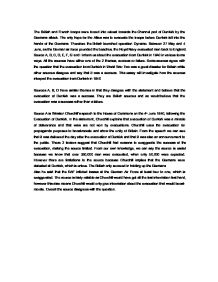 Analysis of different sources of information about Dunkirk.

The British and French troops were forced into retreat towards the Channel port of Dunkirk by the Germans attack. The only hope for the Allies was to evacuate the troops before Dunkirk fell into the hands of the Germans. Therefore the British launched operation Dynamo. Between 27 May and 4 June, as the German air force pounded the beaches, the Royal Navy evacuated men back to England. Source A, B, C, D, E, F, G and I inform us about the evacuation from Dunkirk in 1940 in various forms ways. All the sources have either one of the 2 themes, success or failure. Some sources agree with the question that the evacuation from Dunkirk in World War Two was a great disaster for Britain while other sources disagree and say that it was a success. This essay will investigate how the sources interpret the evacuation from Dunkirk in 1940 Sources A, B, D have similar themes in that they disagree with the statement and believe that the evacuation of Dunkirk was a success. They are British sources and so would believe that the evacuation was a success rather than a failure. Source A is Winston Churchill's speech to the House of Commons on the 4th June 1940, following the Evacuation of Dunkirk. In the statement, Churchill explains that evacuation of Dunkirk was a miracle of deliverance and that wars are not won by evacuations. ...read more.

There are also navy vessels out in the sea. As Cundall is an official war artist, he would have been appointed by the government, so you are not sure whether this was painted for propaganda purposes or that this was what Cundall had seen. As presumably he should have been there at the time, but we are not sure. If Cundall was not there, then Cundall may have had no choice but to portray Dunkirk as a success because the government would have given information that would be positive. In the painting the evacuation seems to be portrayed better than it actually is and that it was not a failure. Therefore this source does link in with source A, in that you get the sense of a moral victory which was supported by Winston Churchill view in source A. A 'miracle of deliverance' which both sources have and also turning defeat through to victory by the means of propaganda. In some ways source I is limited as the painting could be portrayed to boost-morale and show the unity of Dunkirk, the Dunkirk Spirit. It is heroic, being evacuated under fire, thus creating a particular image. From our own knowledge we can say the source is useful because we know around 350,000 men were evacuated and clearly in the painting there are vast amount of troops being evacuated. ...read more.

If rifles were left behind you get the feeling anything heavier or bigger was left behind too. However the source is limited because this shows only one aspect and show the troops evacuating or what sort of ships were used by the British to evacuate the troops. Overall the source is reliable because it was not for publication, not from the government and so not for propaganda either. There was to perspective for the photo, just another person who owned a camera taking a photo. Whereas in source E, Horrock was there at the time so it is a primary source however he wrote it around 20 years after Dunkirk so his memory have been distorted or his emotions have taken over his writing. He was also writing in hindsight and he knew what happened at the end as well, which may have changed the way he thought during the time. He was a Brigadier and so was in charge of many soldiers, so he must have some authority. The source is useful because it shows that troops were ashamed and exhausted, it was a complete shambles, they made a mess and shows that they were not organised. However it is limited because he was writing it 20 years after the event itself and therefore he may have changed the way he thought about Dunkirk. Overall this source is reliable. The source is useful to us because there is a lot of information and the source agrees with the question. ?? ?? ?? ?? ...read more.