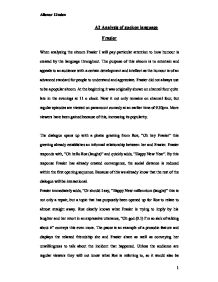 A2 Analysis of spoken language Frasier When analysing the sitcom Frasier I will pay particular attention to how humour is created by the language throughout. The purpose of this sitcom is to entertain and appeals to an audience with a certain development and intellect as the humour is of an advanced standard for people to understand and appreciate. Frasier did not always use to be a popular sitcom. At the beginning it was originally shown on channel four quite late in the evenings at 11 o clock. Now it not only remains on channel four, but regular episodes are viewed on paramount comedy at an earlier time of 9.30pm. More viewers have been gained because of this, increasing its popularity. The dialogue opens up with a phatic greeting from Roz, "Oh hey Frasier" this greeting already establishes an informal relationship between her and Frasier. Frasier responds with, "Oh hello Roz (laughs)" and quickly adds, "Happy New Year". By this response Frasier has already created convergence, the social distance is reduced within the first opening sequence. Because of this we already know that the rest of the dialogue will be interactional. Frasier immediately adds, "Or should I say, "Happy New millennium (laughs)" ...read more.

The sitcom then picks up pace and moves onto the scenes from the previous New Year. This scene involves Frasier, his brother Niles, Martin their father and Daphne their cleaning lady as well as Martins physical therapist. The scene opens up with an imperative utterance from Niles, "Cancel the millennium (0.1) Chez Henri has burnt down" Niles is very similar to his brother Frasier with his outlook on life, but Niles is a much more relaxed person in contrast to Frasier who frequently explodes if things do not go his way, "Burnt down?" Frasier explodes in horror. Niles creates humour with his detailed description of Henri caramelising a huge Cr�me Brule when a sugar spark ruined it all. Niles is therefore flouting the maxim of quantity for he is creating laughter by saying too much about the incident with the use of metaphors to conjure up images in the viewers mind, "Ignited a thirty foot paper space needle..." Frasier and Niles are lovely people but their outlook on life because of the way they have been brought up are completely the opposite of their father Martin. ...read more.

it's nice to reconnect" this shows his feelings of superiority no matter how good his intentions are by, "Reconnecting" A feature of Martins informal language is the use of many contractions such as, "You're", "They'll" and "That's" this displays the level of informality he has with Frasier and Niles, "Yeah you're the most important member of our group buddy" Martin also says this in response to Niles pleas to be allowed to drive the Winnebago. This forms laughter because Niles is clearly not what Martin describes him as, in fact he is useless as Martin ends up saying, "Oh (0.1) you're not good with big cars Niles..." by emphasising, "Big Cars" it suggest Niles is too weak to handle such masculine things and lowers his ego on his driving skills and Martin reinforces this by adding, "I tried to teach you to drive my old savoury..." The personal pronoun, "I tried" personifies the utterance and gives the impression that Martin had put all his effort into teaching Niles how to drive and in the end he failed to do so. Alienor Linden 1 ...read more.