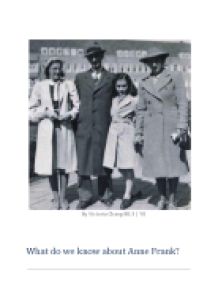 ﻿By Victoria Chang 8B.3 | Y8 What do we know about Anne Frank? ________________ Birth Date June 12th, 1929 Birth Place Frankfurt am Main in Weimar Germany Full Name Annelies Marie Frank Nationality German Hair colour Jet Black Religion Jewish Schools Attended A Montessori School and a Jewish Lyceum Sibling(s) Margot, two years older than Anne Family members Father (Otto Frank), Mother (Edith Frank-Hollande) and Sister (Margot Betti Frank) Death Place Bergen-Belsen Concentration Camp, Lower Saxomy, Nazi Germany Death Cause Typhus When she died March 1945 Hobbies Anne enjoyed playing with her toys, riding her bike and going to the seaside. Famous and known for Diary of a young girl About her diary Anne received a diary for her 13th birthday and from that day (12th June 1942) till (1st August 1944) she wrote in her diary. She called her diary ?kitty? as she treated the diary as a friend. She wrote about life she had in hiding and what she did there, about the people that hid with her and how hard it was to survive in the cramped conditions for such a long period of time and other hardships she met. But she also reflected on the bright side of life-her ambitions to publish her diary when the holocaust was over, and how lucky she was. Her dream was achieved after her father, who survived the holocaust was handed the diary by Miep Gies, a friend who aided the Frank family and the others in hiding at the secret annex. ...read more.

The arrest The secret had somehow been revealed on the morning of 4th August 1944 when German Sucurity Police stormed into the house and everyone living there had been arrested but Johannes was later released due to his illness. Till today, we still don?t who betrayed the secret that cost most of the lives of the people who hid in the secret annexe. The deaths When the Jewish people were sent to concentration camps, men and women were separated so Anne?s father, Otto was parted from his family. By day Anne had to do labour and at night they were crammed into overcrowded barracks. Anne, margot and Mrs. Van Pels were moved to Bergen-Belsen. Typgus was spreading round the camp in March and there Margot died followed by Anne a few days later. The survivor Out of the group, Otto Frank was the only remaining survivor. In 1953 he remarried and set to work in spreading his daughters views and her diary and defending that it was not a forgery or a fake. Margo Frank ________________ Edith Frank ________________ ________________ ________________ How do we know these facts are true? ________________ We know Anne Frank was a real person who existed because there were several witnesses who have seen /known her, for example Miep Gies (pictured bottom left) gives evidence that she knew Anne and she had seen Anne writing the diary. ...read more.

Karl Silberbauer Opponents of the diary continued to express the view that it was not written by a child, but had been created as pro-Jewish propaganda, with Otto Frank accused of fraud. In 1959, Frank took legal action in Lübeck against Lothar Stielau, a school teacher and former Hitler Youth member who published a school paper that described the diary as a forgery. The complaint was extended to include Heinrich Buddegerg, who wrote a letter in support of Stielau, which was published in a Lübeck newspaper. The court examined the diary, and, in 1960, authenticated the handwriting as matching that in letters known to have been written by Anne Frank, and declared the diary to be genuine. Stielau recanted his earlier statement, and Otto Frank did not pursue the case any further. What difference does it make whether the diary is true or not? ________________ I don’t think it makes much of a difference although it does make it much more powerful to people to know that it is real - if it was fiction, we could say "that wouldn't happen in real life". But whether the story is true or not, for me the history was true through the realistic story and the wonderful but tragic account of a Jewish girl in hiding during the Holocaust gets people to share, understand and contribute to the dreadful history by feeling and knowing about it- almost making us indirect victims and making sure it never happens again. Thank you Anne for sharing your thoughts and your diary with us. ...read more.