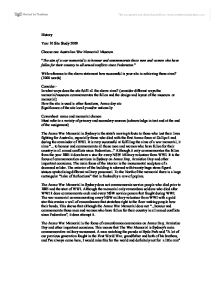 History Year 10 Site Study 2009 Choose one Australian War Memorial/ Museum "The aim of a war memorial is to honour and commemorate those men and women who have fallen for their country in all armed conflicts since Federation" With reference to the above statement how successful is your site in achieving these aims? (1000 words) Consider:- In what ways does the site fulfil all the above aims? (consider different ways the memorial/museum commemorates the fallen and the design and layout of the museum or memorial) How the site is used ie other functions, Anzac day etc Significance of the site locally and/or nationally Coversheet: name and memorial chosen Must refer to a variety of primary and secondary sources (acknowledge in text and at the end of the assignment) The Anzac War Memorial in Sydney is the state's moving tribute to those who lost their lives fighting for Australia, especially those who died with the first Anzac force at Gallipoli and during the remainder of WWI. ...read more.

This means that The War Memorial is Sydney's main commemorative military monument. A man watching the parade at Hyde Park said "A lot of our previous generation fought in the First World War, grandfather and both of his brothers, and I've always come here, I would miss this for the world and definitely not for a little rain" he said1. This quote shows that many people head to Hyde Park on Anzac day no matter what the conditions are like, showing that the Anzac War Memorial in Hyde Park is Sydney's main commemorative military building. The main focus of the interior is a sculpture designed by Rayner Hoff it is of a deceased youth, representing a soldier, held aloft on his shield by three female figures, representing his mother, sister and wife. The sculpture is set low into the ground making views bow their heads as though they are in prayer. The male figure's nudity was considered shocking at the time of the monument's opening, and it is said to be the ...read more.

In short the Anzac War Memorial does fulfil these requirements, "The aim of a war memorial is to honour and commemorate those men and women who have fallen for their country in all armed conflicts since Federation". Although it only commemorates the fallen from the year 1885 it does have a star for every NSW Military volunteer from WWI. It is the focus of commemoration services in Sydney on Anzac Day, Armistice Day and other important occasions. The main focus of the interior is the monumental sculpture of a deceased solider. The exterior of the building is adorned with twenty huge stone figural statues symbolising different military personnel. To the North of the memorial there is a large rectangular "Lake of Reflections" that is flanked by a row of poplars. The Anzac War Memorial in Hyde Park Sydney without doubt fulfils the aims of any war memorial. 1 Interview from http://www.abc.net.au/news/stories/2007/04/25/1906164.htm 2 Info gathered from picture found on http://www.sydneyarchitecture.com/cbd/CBD014D-13.jpg (can be seen after bibliography) 3 Seen on http://www.sydneyarchitecture.com/cbd/CBD014D-07. ...read more.