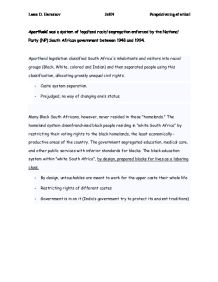 Apartheid - a system of legalized racial segregation enforced by the National Party (NP) South African government between 1948 and 1994.

Apartheid was a system of legalized racial segregation enforced by the National Party (NP) South African government between 1948 and 1994.

Many Black South Africans, however, never resided in these "homelands." The homeland system disenfranchised black people residing in "white South Africa" by restricting their voting rights to the black homelands, the least economically-productive areas of the country. The government segregated education, medical care, and other public services with inferior standards for blacks. The black education system within "white South Africa", by design, prepared blacks for lives as a laboring class.

A Coward which also concerns the issue of the Indian caste system is useful for drawing a parallel to the article: India’s “hidden apartheid”.

The way that people are restricted because of the caste system indicates a lack of freedom for these people. They cannot love the one they want and they have to devote their lives to the profession and lifestyle of their caste, in a caste system where some people are supposedly better than others. Freedom is violated due to the prejudged destiny of each individual.

In this story the young girl and the young boy try to break with these prejudged boundaries, but in the end they bow down to the pressure put upon them by society. Despite of this the government of India tries to protect this old tradition by claiming that there is a distinct difference between caste and race, and on top of that the caste system is still working as an undeniable norm in the society of India.

With a none-violence policy Mahatma Gandhi fought inequity and constantly tried to wrestle India off of British rule. Following his life, the movie picks up on all of which he fought and had to go through to see his dream of an independent and free India realized. Using pure facts as a keystone for the movie, it has come to catch the attention of the viewer in a very strong and sincere way.

A country under the rule of Britain and divided on the inside due to religious unrest, the odds Mahatma Gandhi faces are slim, yet he is ready to give his life for the cause.

In South Africa, Gandhi faced discrimination directed at Indians. Initially, he was thrown off a train, after refusing to move from the first class to a third class coach while holding a valid first class ticket. Traveling further on by stagecoach, he was beaten by a driver for refusing to travel on the foot board to make room for a European passenger. He suffered other hardships on the journey as well, including being barred from many hotels. In another of many similar events, the magistrate of a court ordered him to remove his, which Gandhi refused. These incidents have been acknowledged as a turning point in his life, serving as an awakening to contemporary social injustice and helping to explain his subsequent social activism. It was through witnessing firsthand the injustice against Indians in South Africa that Gandhi started to question his people's status within the British Empire, and his own place in society.