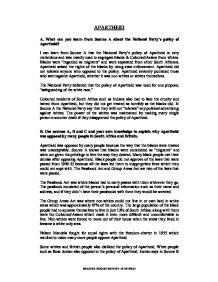 After analysing Source F I would say that it does support the views of the Bantustans in Source E. Source D shows that blacks in South Africa wrote a poem dedicated to Dr Verwoerd, and the poem was sung like a prayer thanking Dr Verwoerd for the beautiful life he has given them. Source D also says that blacks received "proper education" and gave the Bantus "good laws" which was all thanks to Dr Verwoerd. Source D represents a good image of the Bantustans and I can say that it is biased because it is written by the government; therefore it will obviously try to show that blacks were getting the best out of their lives. I believe that Source D does not support Source E because they both have opposite views of the Bantus. Source H on the other hand it partially supports Source E because it agrees with the fact that the people in Bantustan were of old "age" or had a "disability", but Source H also mentions that "doctors, attorneys, agents" were sent to Bantustan which is not true according to Source E. Source E does not say that skilful people such as doctors and agents were a part of Bantustan. ...read more.

There was still a problem because as the businesses grew the more skilled workers they needed. This caused problems they needed skilful workers and blacks were not educated enough to do the jobs that require skill. Apartheid created violence with the blacks in South Africa which was harmful. In Sharpeville police shot and killed 69 people because of the anti-pass law demonstration organised by the PAC in 1960. Similarly in 1976 hundreds of students were killed and thousands were injured after Soweto students demonstrated against the teaching of Afrikaans in schools. Apartheid killed many people through violence to maintain the power of Apartheid. Apartheid was unworkable because as opposition grew in South Africa simultaneously it also grew outside South Africa. Apartheid was unable to demolish the fast increase in opposition and could not survive very long. Source J shows that South African banks were boycotted and says that Apartheid could "never" work and was "harmful" to South Africa. In conclusion after using all the sources and my own knowledge I say that the history of South Africa in the 1950s, 1960s and 1970s fully supports the view of Source J which shows that Apartheid could never work and was harmful to the non-whites in South Africa. SHAJIDUL HOQUE/ HISTORY- APARTHEID ...read more.