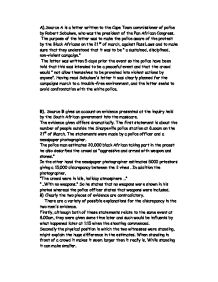 A).Source A is a letter written to the Cape Town commissioner of police by Robert Sobukwe, who was the president of the Pan African Congress. The purpose of the letter was to make the police aware of the protest by the Black Africans on the 21st of march, against Pass Laws and to make sure that they understood that it was to be " a sustained, disciplined, non-violent campaign." The letter was written 5 days prior the event so the police have been told that this was intended to be a peaceful event and that the crowd would " not allow themselves to be provoked into violent actions by anyone". Having read Sobukwe's letter it was clearly planned for the campaigns march to a trouble-free environment, and the letter seeks to avoid confrontation with the white police. B). Source B gives an account on evidence presented at the inquiry held by the South African government into the massacre. The evidence given differs dramatically. The first statement is about the number of people outside the Sharpeville police station at 8.ooam on the 21st of March. The statements were made by a police officer and a newspaper photographer. The police man estimates 20,000 black African taking part in the praest he also describes the crowd as "aggressive and armed with weapon and stones." In the other hand the newspaper photographer estimates 5000 prtestors giving a 15,000 discrepancy between the 2 vines . In addition the photographer, "The crowd were in idle, holiday atmosphere ..." "...With no weapons." So he states that no weapons were shown in his photos whereas the police officer states that weapons were included. ii) Clearly the two pieces of evidence are contradictory. There are a variety of possible explanations for the discrepancy in the two men's evidence. Firstly, although both of these statements relate to the same event at 8.00am, they were given some time later and such would be influents by what happened later at 1:15 when the shooting commenced. ...read more.

This source presents the facts quite clearly and points towards the shooting being sudden and without warning. Source G is an extract from an 1960 article in the 'Drum' by journalist Humpherey Tyler who was present at the shooting which makes him an eye witness. 'Drum' was a magazine read largely by the black population. The source begins actively; "then the shooting started". Tylor suggests that the crowd did not take it seriously due to some of them laughing" he continues "they must have thought the police were firing blanks". Tylor gives an example of an incident that happened in the surprise shooting, of a reaction of a young man as his companion is shot, he thought she had simply stumbled, not realizing they were being shot at. Tylor says that he personally did not hear any warning before the shooting "there was no warning volley". He also says that the police 'claimed' that they were in desperate situation and the crowd were aggressive. So Tylor did not witness any danger towards the police, in fact only the police said that they were in danger, there were no other witnesses to this. He also quotes when the police say "ferocious weapons" because the language is neutral, despite the fact that he "looked carefully, and afterwards studied the photographs of the death scene" he saw no weapons. Source H is a photograph taken at Sharpeville on the 21st March 1960, just after the shooting started in the afternoon. It is a depressing photograph showing the dead protesters lying in pools of blood. The important thing to notice is that there are no signs of weapons or any threatening objects in sight. This allows us to contemplate whether there were weapons in the possession of the demonstrators. Source I is a report on the Sharpeville massacre written in 1960 by Bishop Ambrose Reenes who was a member of the UN unit on Apartheid. ...read more.

The other the reason was that in Sophiatown many Africans owned the land they lived on. It was obvious that the blacks were having their rights attacked. African families defended themselves by protesting against moving but the military force was used to gather up and remove the large number of remaining Africans. The Sharpeville protest was against 'Pass laws'. A system called Aparthied was set up the faculties designed for whites. And so Pass laws were introduced. There was obviously a very detailed medical examination of the dead and wounded which enables an accurate picture of the event making it hard facts. According to the medical evidence it was clear that the police continued firing even after the people began to flee, as most them were found shot in the back proving that they were fleeing. Source h is a photographic evidence which clearly shows no signs of weapons or any other threatening objects. And it shows lots of Africans dead shot in the back which proves the previous point. There's also evidence of which a whole variety of witnesses who had nothing to gain from lying about what happened . source E is where the white policemen states "I had no difficulty" while driving through the crowd. He was supporting the blacks. Also the white photographer in source G 'Humpherey Tylor' states "before the shooting I heard no warning to the crowd to disperse" making it clear that the shooting was sudden. Another eye witness was Nelson Mandela who experienced the Sharpeville shooting. he states "the demonstrators were controlled and unarmed . so no danger was shown towards the policemen. He also says "no one heard warning shots.." "...it was a massacre". There were obviously children there and people were not prepared for what happened. The evidence suggest that the attack was premeditated and intended to do the maximum damage, only Lt Col Pieneer and the other police witness gave any evidence to the contrary; the judge clearly believed that other methods could and should have been used. ?? ?? ?? ?? ...read more.