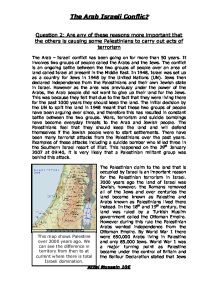 Question 2: Are any of these reasons more important that the others is causing some Palestinians to carry out acts of terrorism The Arab - Israeli conflict has been going on for more than 50 years. It involves two groups of people called the Arabs and the Jews. The conflict is an ongoing battle between the two groups of people over an area of land called Israel at present in the Middle East. In 1948, Israel was set up as a country for Jews in 1948 by the United Nations (UN). Jews then declared independence from the Palestinians and their own Jewish state in Israel. However as the area was previously under the power of the Arabs, the Arab people did not want to give up their land for the Jews. This was because they felt that due to the fact that they were living there for the past 1000 years they should keep the land. The initial decision by the UN to split the land in 1948 meant that these two groups of people have been arguing ever since, and therefore this has resulted in constant battle between the two groups. Wars, terrorism and suicide bombings have become everyday threats to the Arab and Jewish people. The Palestinians feel that they should keep the land and will defend themselves if the Jewish people were to start settlements. There have been many terrorist attacks from the Palestinians over the past years. Examples of these attacks including a suicide bomber who killed three in the Southern Israel resort of Eilat. This happened on the 29th January 2007 at 09:40, it is very likely that a Palestinian militant group was behind this attack. The Palestinian claim to the land that is occupied by Israel is an important reason for the Palestinian terrorism in Israel. 2000 years ago the land of Israel was Jewish, however, the Romans removed all of the Jews and over centuries the land became known as Palestine and Arabs known as Palestinians lived there instead. ...read more.

The strict border control also stopped people travelling by car. The people of Palestine want the Gaza airport reopened to enable them to travel around the world. * Jewish settlements - Illegal Jewish settlements have grown over the years in Palestinian land. Jews have populated in many areas of the Palestinian land. They want all of these settlements rid of so they can have a peaceful life. These settlements which are internationally illegal will irritate the Palestinians and push them to a point where they are committed to taking part in a terrorist attack. The long term cause has to be looked at first. The long term cause is to do with the land which they are really fighting for. If there was no argument over the land, there would be no argument at all. The Palestinians and Israelis would have nothing to fight over. One of the strongest reasons for the Palestinians to carry out acts of terrorism is the treatment of the Palestinians over the past years. This is because of the extremely and unjustly and somewhat horrific treatment that they have had to endure. It is fair that the Palestinians are carrying out acts of terrorism against the Israelis. Looking from a neutral point of view it is fair to say that anybody would retaliate by taking these actions against the restrictions and awful life that they have had to suffer. Another very strong reason from the point of the Palestinians is the three treaties which have failed. The treaties which were put to together were all broken by the Israelis and so, proves the Israelis lack of understanding and humanity. It shows how the Palestinians had made efforts for peace but the Israelis did not want this. So when peaceful talks failed, people opted for an alternative approach. This was the approach of the Hamas group; all of these reasons together have motivated the terrorism from the Palestinians. ?? ?? ?? ?? The Arab Israeli Conflict Afzal Hussain 10E ...read more.