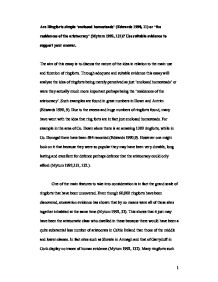 Are Ringforts simple 'enclosed homesteads' or 'the residences of the aristocracy'?

Are Ringforts simple 'enclosed homesteads' (Edwards 1990, 11) or 'the residences of the aristocracy' (Mytum 1992, 131)? Use suitable evidence to support your answer. The aim of this essay is to discuss the nature of the idea in relation to the main use and function of ringforts. Through adequate and suitable evidence this essay will analyse the idea of ringforts being merely perceived as just 'enclosed homesteads' or were they actually much more important perhaps being the 'residences of the aristocracy'. Such examples are found in great numbers in Down and Antrim (Edwards 1990, 9). Due to the excess and huge numbers of ringforts found, many have went with the idea that ring forts are in fact just enclosed homesteads. For example in the area of Co. Down alone there is an amazing 1300 ringforts, while in Co. Donegal there have been 684 recorded (Edwards 1990,9). However one might look on it that because they were so popular they may have been very durable, long lasting and excellent for defence perhaps defence that the aristocracy could only afford (Mytum 1992,131, 132.). ...read more.

This definitely is an aristocratic site as there is there is wealthy items present, plus there is the evidence of substantial works being carried out by skilled craftsmen (Edwards 1990, 33). In the north east parts of Ireland such as Armagh and Down there is a great amount of archaeological to show that ringforts were in fact refurbished and rebuilt. The ringforts that had their ditches and banks rebuilt more than once were most definitely owned by the aristocracy. (Mytum 1992 123-124). We know this because the base clients acted as servants to the aristocracy. It was those who rebuilt the ringforts. The platform ring forts that were constructed were built by constantly adding to the banks. The higher the banks and deeper the ditches meant that it was only that of the elite aristocracy who dwelled in those ringforts (Mytum 1992, 125-126). Some ringforts would have been situated on high ground where visibility would have been excellent. Drumlins acted as a very prominent position. ...read more.

The local aristocracy who would have been seen as the most important groups in the community, their residences would have needed to be able to resist military attacks. However ringforts by no means were "not forts in the accepted military sense" (Edwards 1990, 12). As the majority of Irish ringforts were built on good arable and fertile land that would be good for agriculture, meant that it would have been the ordinary peasants of rural Ireland who tended to occupy them. In Skibbereen in Cork the vast number of ringforts were situated on decent agricultural land (Edwards 1990, 20). In conclusion it should be said that ringforts were both "residences of the aristocracy" (Mytum 1992, 131) as well as being simple "enclosed homesteads" (Edwards 1990, 11). There is sufficient evidence to support both points of view. Ringforts such as that at Garranes in Cork was clearly of the aristocratic classdue to the precious ornaments uncovered. But the smaller ones where no artefacts have been found suggest just simple homesteads. These earthen enclosures were quite simple and they held residence to both the ordinary small farmers of Ireland as well as the highest kings in Ireland (Stout 1997, 11). ...read more.